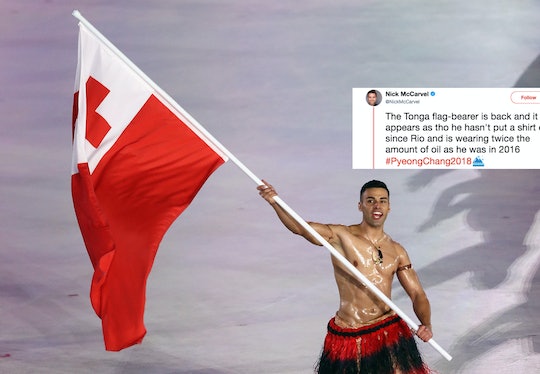 It was the moment so many people were waiting for. The reason we got up so ridiculously early to watch the opening ceremony of the Winter Olympics in PyeongChang. And we weren't disappointed. The Tonga flag bearer returned to the opening ceremony shirtless and oiled up, and Twitter naturally lost it.

Pita Taufatofua, the well-appreciated athlete and flag bearer for Tonga made a spectacular return to the opening ceremony of the Winter Games on Friday morning. While everyone else at the games was dressed for the severe cold (other than the athletes from Bermuda, who wore shorts to the opening ceremony), the Tonga flag bearer decided to do things a little differently. Olympic athlete Taufatofua showed up wearing a traditional Tongan skirt, slathered in coconut oil and not much else. The internet was pretty excited to see the Olympic athlete and resident Tongan hunk again after his first appearance at the Olympic Games in Rio in 2016. Taufatofua, who competed in taekwondo in Rio, managed to just barely qualify for the Winter Olympics in PyeongChang for the cross-country skiing category. This is reportedly a new sport for the Tongan flag bearer, and honestly I think I speak for all of Twitter and beyond when I say, bless you, sir.

So how does Tonga's only Winter Olympic athlete feel about the attention he's been getting for his shirtless, oiled flag bearing skills? Just fine, apparently, although he was pretty surprised at the reaction online. He told People, after the Rio Olympics:

I had no idea how much attention that would get. In Tonga where you have a lot of traditional dances, the oil and the outfit I was wearing was quite normal. But in Rio it turned out to be a pretty big deal.

The Australian-born Taufatofua grew up on the tiny island nation of Tonga after his father moved his family there when he was a little boy. While it might seem like an unusual place to take on any winter sports with the climate being what it is, the Tongan flag bearer told People he was determined to challenge himself and try his hand at cross-country skiing.

After the summer games, I said, ‘You know what? I want a new challenge. I want to find something that’s the hardest possible sport I can think of and see if it’s possible to get Tonga qualified within a year.'

As much as Taufatofua might get a kick out of being the famed, oiled up hunk who carries the Tongan flag, he does want people to remember that he puts a whole lot of hard work into competing at the Olympics. He tried to qualify for the Winter Olympics seven times before finally succeeding in Iceland last month in the final qualifying weekend for cross-country skiing. When competing at the games, he will presumably be fully garbed and therefore almost unrecognizable to his many, many fans. Still, the guy had to do some serious work to get to PyeongChang, as he told NBC:

People don’t see the hard work that goes behind. They just see the shiny guy that walks with the flag.

Yes, it's true that fans do see the shiny guy with the flag. But no one is complaining.

However Taufatofua manages to fare in the cross-country skiing event during the Olympics, I feel it's probably safe to say he has already won the opening ceremony. I mean, no shirt, oiled up, and no shoes in frigid temperatures when even water bottles were reportedly freezing? This dude deserves a medal right now. And if they need someone to place a gold medal around his oiled up, muscled throat, I would like to volunteer my services posthaste.