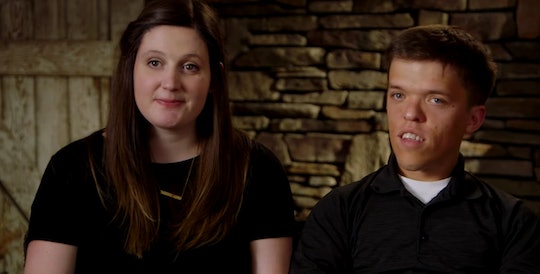 Tori Roloff: It Doesn't Matter To Me That I'm Taller Than My Husband

Little People, Big World star Tori Roloff regularly shares glimpses on social media of her life as a wife and a new mom, and from the looks of it, she wouldn't change a single thing. But given that both her husband and infant son were born with a form of dwarfism called achondroplasia, Tori is also aware that there are plenty of people who might not feel the same way if they were in her shoes — and often for one completely ridiculous reason. In a moving Instagram post Sunday, Tori Roloff said she doesn't care about her husband's height, and it highlighted the totally arbitrary bias that allows people to continue to judge those with dwarfism unfairly.

In her post, Tori posted a beautiful photo from her July 2015 wedding to husband Zach, and shared a story about a recent trip she took to Target, where she overheard a married couple talking. The husband, Tori said, told his wife, "well at least I’m taller than you," to which the wife jokingly responded, "well I would hope so." Of course, they likely had no idea that Tori heard the comment, or that she had a husband who was much shorter than her due to his dwarfism (according to In Touch Weekly, Tori is 5 feet 5 inches tall, while Zach is 4 feet 3 inches), and it's also totally possible they didn't even realize how hurtful that comment could really be. But as Tori pointed out, the expectation among heterosexual couples that the man should be taller than the woman completely ignores the fact that people deserve to be seen and loved for who they are, instead of for aspects of their appearance they literally have no control over.

In the post caption, Tori said the couple's exchange was proof that "some of us just have the idea of beauty and love so backwards," and argued that love "doesn’t come from outward appearances but rather from inner beauty." And she doesn't have to look very far for proof that that is absolutely true: Tori pointed out that, if she'd bought into judgements about height, she'd have missed out on finding a man who is both an incredible spouse and father to their son. She said,

I don’t love Zach because of how he looks (although he is quite handsome if I do say so myself) but rather what things weigh on his heart. It doesn’t matter to me that I’m taller than my husband ... I can’t imagine my life if I had never given my husband a chance because he was shorter than me. Love people because of their minds. Not their bodies.

There's no question that, as the wife of a man with dwarfism, and now the mom of a son with dwarfism, unfair comments about height differences must seem particularly offensive to Tori — after all, not only are they suggesting there's something odd or embarrassing about her marriage, they are also insinuating that her own child will one day automatically be less desirable to his romantic partners just because of his size. And it definitely sounds like something that affected Zach when he grew up: before he proposed to Tori, he revealed in an episode of Little People, Big World that the stigma surrounding his size led him to just assume he would never end up marrying an average-size person, and that it was a big deal to him that Tori couldn't have cared less about their height difference. He said,

I realized from the beginning that she wouldn't be worried about what people would say. People think I'm her kid — weird stuff. Typically girls would totally be thrown off by that, [but] she's not. There's many things I like about Tori, but that's a huge one.

Of course, it's not just men with dwarfism who are hurt by the idea that taller is always better. According to The Independent, shorter men earn less money on average (one study found that each additional inch of a man's height correlated to about an extra $700 in their annual salary) and they are also less likely to be as successful as taller men (in 2009, 58 percent of male CEOs of Fortune 500 companies were at least 6 feet tall). In fact, a 2013 study out of The Netherlands found that women seemed to be happiest in their relationships when they are with a male partner taller than them — which could be why dating site OKCupid revealed in 2010 that men "almost universally" add at least two inches to their height when they create online dating profiles.

In other words, the often-unconscious bias against shorter men has pretty wide-reaching implications that are hugely unfair, and naturally, that only becomes more pronounced when you happen to be someone born with dwarfism. That might not be very welcome news for Zach and Tori's son, but at the same time, as someone who will likely face at least some discrimination in his life over his size, he couldn't really ask for better parents. After all, he's being raised by a father who has always said he'd love to have a child with dwarfism, and a mother who has never thought her husband's size was an issue at all. And in his parents' example, he'll also learn that he has just as much right as anyone else does to expect to find a partner who will love him for who he is, regardless of his height.

To be fair, being a parent of a child born with achondroplasia does come with some very real concerns: according to the March of Dimes, babies born with achondroplasia can experience further complications like apnea, chronic ear infections, compression of the spinal cord, and hydrocephalus, and it's possible that Jackson might face medical challenges in his life. But in her recent Instagram post, Tori made it more than clear that one thing they don't have to worry about is his height. And it's an important reminder we could all benefit from hearing more often.