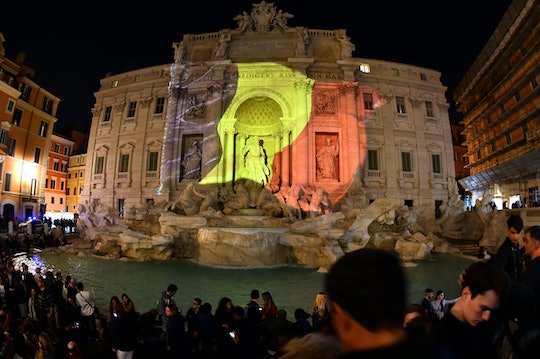 After a series of explosions struck the Zaventem airport and Maelbeek underground metro station in the capital city of Brussels, Belgium on Tuesday morning, killing at least 31 and injuring hundreds more, people all over the world took to social media to express their support for the European city. Thousands of touching tweets after the Brussels attack showcased a united global community, even in the face of terror. It's easy to think of Twitter as a place to watch primetime television together and make sarcastic jokes about the news of the day, but in times of tragedy Twitter somehow manages to put all jokes aside to mourn and show solidarity.

Twitter as a company recently acknowledged that same positive aspect on Monday as it celebrated it's 10th anniversary, tweeting, "Thank you for making history, driving change, lifting each other up and laughing together every day." That sentiment rang true this week: Lifting each other up, it seemed, was exactly the motive for many users to log in and share messages of support as news of the Brussels attacks and rising death toll unfolded on Tuesday.

One user wrote early on Tuesday, "I don't know how my tweet could give the people of Belgium the strength I wish it could give, but my heart is nonetheless with them." Still others rallied around the capital city, tweeting supportive messages and touching condolences for the families of those killed:

Many others refused to let news of the attacks get them down, choosing instead to express solidarity with a swath of more hopeful sentiments:

Some of the most touching tributes to Brussels came from those who might understand the need for global solidarity more than anyone else on the social network:

It's easy to dismiss the use of social media to show support for far away places and people in the wake of tragedies like Tuesday's attacks in Brussels. A hashtag or changing a filter on one's profile picture seems like a safe thing to do, maybe even an easy way out, to some. But a 2014 article in The Atlantic on grieving via social media likens the solidarity people express on social platforms like Twitter to bringing soup or prepped meals to a neighbor when someone in their family is sick or dies. Much like a tweet, a crockpot of even the best chili isn't going to make that family's grief go away.

But when victims, and even bystanders like many of us, of terrorist attacks feel scared and alone in the aftermath, it could be comforting to see that pretty much everyone in the world has gathered in the only place they can to show support in the only way they could at the time. It's like coming home after a death in the family and heating up a pot of soup dropped off by the neighbor you never really knew that well. It's not much and it doesn't make all the bad things in the world go away, but gestures like that are somehow comforting and touching all the same.

Compassion is one of our human instincts and in my opinion, that's a nice thing to remember as more news unfolds from Europe in the coming days. Bringing soup to Brussels, and victims of terror all over the world, isn't practical or useful. But a tweet can be more than just a tweet sometimes.