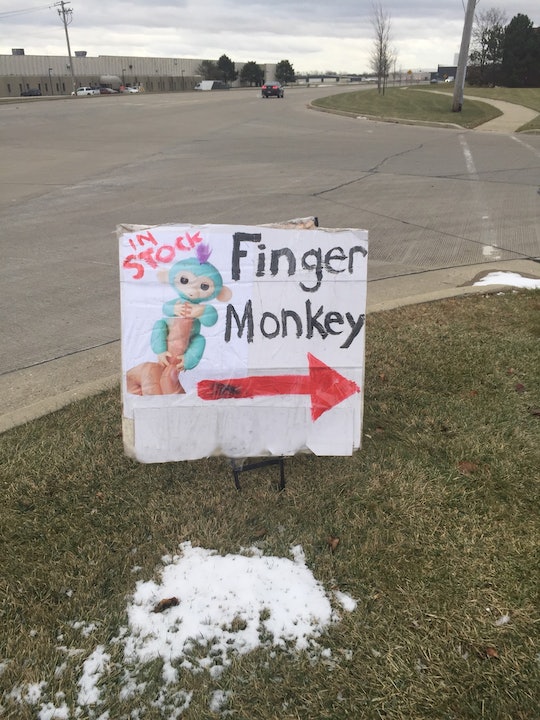 Every year, as I'm searching for my daughter's Christmas list, I'm grateful. Even when I'm adding things up in my head as I scan the aisles at Target or searching on my phone for a better deal, I know I'm lucky to be able to afford the gifts she wants, and I try not to be too annoyed when I come up on an empty shelf where the latest Baby Alive doll or Unicorn Fingerling should be. But for some moms, those empty shelves they're looking at don't even usually house the year's hottest toys — they're the clearance shelves. And when toy flippers get their hands on those great clearance deals in order to make a profit re-selling them for a higher price on Amazon or eBay, it can mean that moms have little to give their kids for the holidays.

I'll give it to them: toy flippers are pretty good at snatching up the hottest deals of 2017 in order to make a profit. Last year's Hatchimal craze is a perfect example. A friend of mine waited in line for over four hours for Target to release the limited stock of Hatchimals they had left. But when the doors opened, it turned out there were only 15 tickets, given to the first 15 people in line. And all 15 of those people? Turned around and tried to sell their tickets to the rest of the customers waiting — at about $200 a pop.

A quick search on Facebook Marketplace in the NYC area shows that there are tons of sold-out Fingerlings available, starting at $20 and going up from there. These are the must-have toys of 2017 that should retail for about $15. But these stories aren't new — it happens every year. A quick search on Reddit pulls up a thread from three years ago with posters talking about how to tell which toys are worth buying when they're in limited stock and how some people were selling Frozen dolls for thousands of dollars. And this year, a story about one man who has literally made millions from buying clearance items at Walmart and selling them on Amazon went viral. He goes to big box retailers, scans clearance items to see what they're selling for on Amazon, and buys all of them so he can make a profit.

And I think it's the shittiest thing in the world.

According to eCommerce and retail analyst Krista Fabregas from FitSmallBusiness.com, "toy flipping" is "an essential part of what's called Retail Arbitrage, a popular way that many independent sellers profit big on Amazon." Fabregas notes that these sellers scour retail clearance racks and bulk clearance stores like Big Lots, Marshalls, Home Goods, and others to find "deeply discounted products to resell on Amazon. Typically, they target goods that are 50 percent off MSRP or more."

Some sellers' mobile apps are so sophisticated that by the time they check out, they already have orders coming in from Amazon shoppers.

I already feel sick. Fifty percent off or more. For a Barbie doll that was once $20, that means a mom could've possibly scored it for as low as $10 on the clearance shelf and used the extra $10 to pick up accessories and clothing. It means that a pack of Hot Wheel cars could be as cheap as $2 and make one kid's stocking extra great. It means that a mom with a Christmas shopping budget could get more bang for her buck — until the flippers swoop in.

Fabregas says it's not a guessing game for flippers. They know exactly what they're doing — and yes, they have an app for that. "Retail arbitrage sellers enter stores armed with cutting-edge cell phone apps that scan the price labels of potential purchases and analyze the profitability in real-time," she says. "If they hit on a 'find,' they scoop up several or all of the clearance stock and list it for sale on Amazon. Some sellers' mobile apps are so sophisticated that by the time they check out, they already have orders coming in from Amazon shoppers."

When I presented my feelings about toy flippers on Facebook, I was met with a mixture of reactions. Most of my friends agreed — this is shitty. All I could think about was the parent who only has $20 to spend trying to find a great toy on the clearance rack and being met by empty shelves, thanks to some guy who is making millions a year re-selling Barbie dolls. But my response was met with some not-so-great comments, including one person who said, "Well at least he's making an income and not living off hand-outs." Which... doesn't really make sense here, with this argument. Of course, I immediately assumed she was saying this as a stereotypical jab at the people shopping clearance aisles. You know, they're probably "living off hand-outs" and can't afford Christmas because they're just lazy.

This is a common stereotype though, and it's one that works its way into Christmas cheer. People are allowed to be angry that a best-selling author bought all of the $60 Hatchimals off the shelf so she could turn over a profit, but it's not OK to be angry at some guy buying all the cheap Barbie dolls? According to the National Center for Children in Poverty, 21 percent of children in the United States live below the federal poverty threshold, but that figure vastly underestimates the basic needs of families. Apparently research has found that families actually need twice the amount of the federal poverty threshold in order to cover basic expenses. When you use the researched threshold, you'll find that nearly half of America's children — a whopping 43 percent — live in low-income households. Which means there are a lot of moms scouring the clearance shelves looking for toys, games, books, and other essentials.

And I can admit — if you're buying an item through Amazon, you're probably getting it cheaper than you could find on a full-price shelf. But I just can't shake the feeling that there's something "icky" about toy flipping. Whether you're buying the brand new Nintendo console to sell for three times the asking price on eBay, or hoping your collection of clearance Elsa and Anna dolls will go like hotcakes, it feels wrong. And, in some instances, it is.

Curry College Business Management Professor Dr. Ishani Tewari tells Romper that, from a brand perspective, "toy flipping can be detrimental to its image and credibility. Once the brand loses control of the supply line, the consumer might end up with a damaged or defective product. The resulting negative feedback and reviews will hurt the brand. And this is on top of lost revenue because of the price cut."

I can attest to this. Last year, I searched for over six weeks for the latest mini Nintendo Classic console to give my husband. It was nowhere to be found, except on eBay and Amazon where it was going for literally hundreds of dollars, despite the retail price being around $50, and the brand seemed to take a hit. There were hundreds of 1-star reviews on Amazon as customers claimed the item was too expensive and that the brand failed to account for consumer demand.

There are also some legalities a reseller can run into, according to Tewari. "Some toy brands, such as Legos, are trademarked and the retailer is required to sign a contract with the manufacturer in order to sell the product," she explained.

Entrepreneur noted that while it's legal in most cases, there's also an issue with warranties. Since a reseller is not the actual company, warranties are often invalidated and there can be trademark infringement issues if a reseller is using a product's trademark or logo to sell the item.

But in short? There's not much people can do. Toy flipping is a lucrative business and one that many people are indulging in. While it sounds like a great way to make some extra bucks, my heart hurts. I just can't imagine standing in line to swoop up the latest baby dolls so I could make a profit, any more than I can imagine buying all of the clearance Play-Doh kits just to resell on Amazon. Whether someone's buying items for Toys for Tots or trying to make their kid's Christmas, there's somebody who needed those items more than my wallet did, and I can't fathom being a millionaire by reselling Walmart's clearance inventory on Amazon.

The good news is, some of my panic over the cleaned shelves isn't warranted. Fabregas tells Romper that parents hoping to find savings by shopping the clearance rack shouldn't worry too much. "Even at a 40 percent discount, which is a fair amount off, the Amazon profit can be tight since Amazon charges some hefty fees. Retail arbitrage shoppers generally snap up the super-deep discounts, and then only on goods that have proven demand and sales volume on Amazon. So, parents will still find some deals on the clearance aisle this holiday season, even after the toy flippers hit the shelves."

So while the hot new Barbie of 2017 may not be on the clearance rack for whatever reason, last year's favorite could still be left. And for a child who just wants a toy, that can mean the world.

If you're bothered by toy flippers, too, there is one thing we can do to right the scales this Christmas. I intend to hit up my local Walmart, scout out the clearance section, and buy a few toys to drop in the Toys for Tots box, or to give those that I know would really appreciate them.

But I still think toy flippers are the Grinch before his heart grew three sizes.