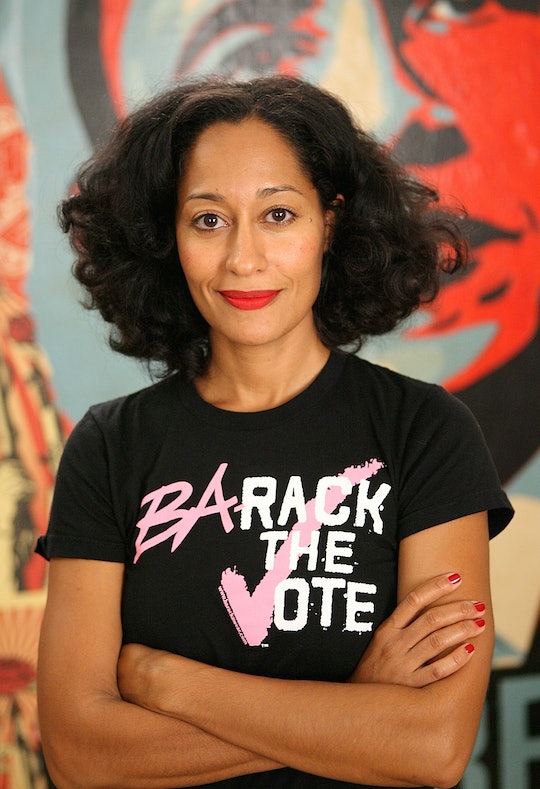 Ahead of the 2020 election, celebrities have been using their platforms to remind voters their voices count, especially among African Americans. Like Black-ish star Tracee Ellis Ross, who encouraged Black voters to head to the polls and combat voter suppression in a powerful PSA.

On Monday, Ross appeared in the final video for "OWN Your Vote," a bipartisan campaign launched by Oprah Winfrey in August to offer tools for African American women on voter registration, mail-in ballots, and polling sites. The campaign also put out a digital series to highlight Black political issues and concerns. For Ross' video, she addressed voter suppression.

"Please know voter suppression is happening," the Girlfriends actress stressed in the video. "And no one would try to suppress your vote if your vote didn't matter. Your vote absolutely matters."

Ross then went on to explain what voter suppression looks like and its leading cause — mismatched signatures. "It can be everything from long lines, voter ID restrictions, reduced polling locations or illegally purging voters from the rolls," Ross said.

Among the top states were voter suppression is being seen are Florida and Georgia. In Florida, for example, Amendment 4 to restore voting rights to former felons was overruled by the Republican-led legislature, creating new challenges to allow former felons to vote. The Washington Post called the ruling the "21st-century version of Jim Crow." Also in Florida, as NBC News reported, mail-in ballots from Black, Hispanic, and Asian voters have been rejected at higher numbers than white voters, which Ross also noted in her PSA. In Georgia, voter suppression has driven a historic number of Black voters; according to Common Cause Georgia, voter turnout is 64% higher than the 2016 election.

"But don't let any of this prevent you from voting," Ross stressed, going on to encourage those watching to find their local election office and return their ballot by Election Day.

"The best answer to voter suppression is voter turnout, so turnout and vote," Ross said in the video. "Pull up, show up, and vote. Wear a mask, be safe and vote. But vote."

Ross has been very active in this election season. On Nov. 2, she co-hosted a virtual voting event in Florida in support of Democratic presidential candidate Joe Biden and Sen. Kamala Harris ticket. The actress is also actively involved in the When We All Vote campaign.

As for Ross, the 48-year-old actress shared on Instagram as our "Voting Fairy" that she voted early last week. "Voting is not the end of the story," Ross pointed out in her Instagram video. "Voting is only part of the story. Once we get done what we need to get done, then we hold those elected officials accountable."