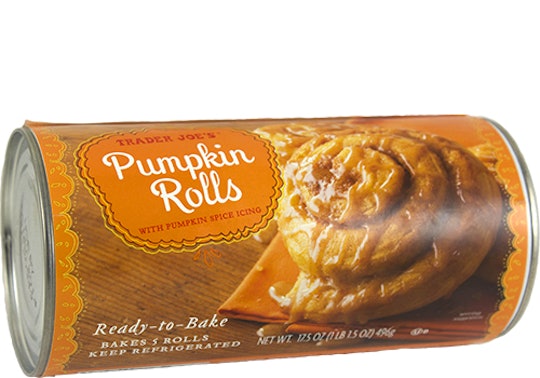 Trader Joe's Pumpkin-Spiced Cinnamon Rolls Are Back, & They're Damn Good

If you’re more into treats than tricks this time of year, you’ll be happy to know that Trader Joe’s Pumpkin Rolls are back, and they’re just as delicious as ever. These gooey treats come in the signature cylinder packaging that pops open to reveal five ready-to-bake rolls your family will love (if you’re willing to share).

Sometimes I think that pumpkins are like elves; they toil away on some random pumpkin patch for nine months until they descend upon us in the fall, spreading joy wherever they go. If my theory is correct (which, I mean, it must be) then the most talented pumpkin of all worked on this seasonal offering from Trader Joe’s because the pumpkin rolls with pumpkin spice icing are fa-boo-lous, and I’m already daydreaming about how good they will taste on a slow Sunday morning with a steaming mug of coffee. I'll even light my vanilla pumpkin candle from TJ's and really have myself an autumn day.

What makes these sticky pastries so amazing? Well, if you picture a soft, warm cinnamon roll dripping with sweet, velvety icing, you may think breakfast (or dinner, you do you) can’t get any better, and in the past you would've been correct. Now imagine that same doughy goodness, but instead of just a single note spice (not to knock cinnamon or anything) the dough is infused with real pumpkin and warm, sweet-smelling spices: nutmeg, cloves, and yes, cinnamon still gets to have its moment.

Oh friends, and the icing! Let me preface this by saying I am that jerk who will eat the frosting off a perfectly good cupcake and leave the cake part under the guise “someone will eat it.” As my fiancé recently pointed out, “no one wants your soggy cake,” and he may have had a point. Anyway, in my humble opinion, Trader Joe’s pumpkin rolls are really all about the pumpkin spice icing (which comes in a generous bag, as the kind folks of TJ's know better than to deprive us of the good stuff). It’s where most of that pumpkiny-flavor comes from, as it's made with pumpkin puree and and warm, seasonal spices that scream October. You drizzle it on the rolls after they’ve baked at 350 degrees Fahrenheit and cooled for a few minutes. *Chef’s kiss*

Both the rolls and icing are a soft orange color instead of the usual white, which makes them look very on-brand for the pumpkin spiced-obsessed. The color is derived from beta-carotene, which is an antioxidant (often associated with carrots) that helps the body fight free radicals, per Healthline. Hold up, does this mean that pumpkin rolls are… healthy? Not really, but don’t let that stop you; I’m one of those “Halloween-is-a-month-not-a-day" people and I believe that October should be a month-long festival of desserts, so vote for me!

You may want to load up on these babies while they last, however, because while they're available nationwide they’ll only be around for, “as long as we can make pumpkin season last,” according to a Trader Joe’s Fearless Flyer memo. You’ll find them in the refrigerated case, and they retail for $4. Less than one dollar a roll? I'll take them all.