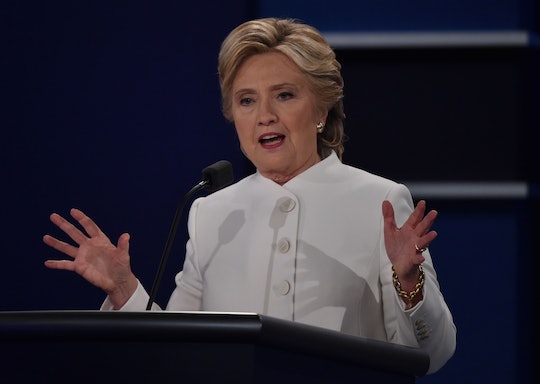 Although the presidential debates are full of important moments, it's the closing statements that stand the test of time, especially in the third and final debate held Wednesday, Oct. 19. It is the last time the world will see Clinton and Trump on stage together, with Election Day is only a few weeks away. No matter how heated the disagreements get or how many times she's interrupted, Clinton has her closing statement in each debate — her final words after going round for round with Trump, her final words to give the American people when they have just witnessed her square off with the Republican presidential nominee.

In the first presidential debate, Clinton gave her closing statement and included some powerful lines. "Vote as if your future depended on it," she said. "Because it does." In the second presidential debate, her closing statement became even more important. "I believe that this election has become in part so conflict oriented, so intense because there's a lot at stake," she said. "This is not an ordinary time. This is not an ordinary election."

In her third and final presidential debate, Clinton's closing statement was just as powerful. Moderator Chris Wallace tried something new this debate and gave each candidate one minute to tell the American people why they should vote for them. Clinton wasted no time in getting her mission across with plenty of heart.

"Well, I would like to say to everyone watching tonight that I'm reaching out to all Americans — Democrats, Republicans, and Independents. Because we need everybody to help make our country what it should be. To grow the economy, to make it fairer, to make it work for everyone. We need your talents, your skills, your commitment, your energy, your ambition. You know, I've been privileged to see the presidency up close and I know the awesome responsibility of protecting our country and the incredible opportunity of working to try to make life better for all of you. I have made the cause of children and families really my life's work — that's what my mission will be in the presidency. I will stand up for families against powerful interests, against corporations. I will do everything I can to make sure you have good jobs with rising incomes, that your kids have good educations from preschool through college. I hope you will give me a chance to serve as your president."

And that's it. That's the final time you will see Democratic presidential candidate Hillary Clinton on stage debating Donald Trump. But her closing statement took away all of the stress and nastiness of the debate — she outlined the American dream. She brought it back home to those with children, those with families, and those who want to feel like they are making a difference. Clinton proved that she is for everyone and that her heart is right where it needs to be as president — with the American people.