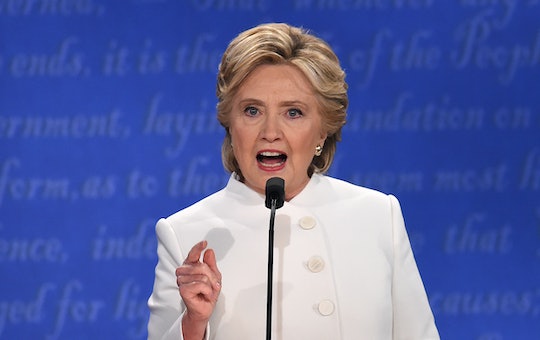 It's been a long election season, but Wednesday night's debate marked the beginning of the end. Not surprisingly, the transcript of Hillary Clinton's opening statement at the last debate was to the point and stressed the importance of the topics she and Republican presidential nominee Donald Trump would talk about when it comes to making a decision on Election Day. Clinton's strategy since clinching the Democratic nomination this summer has been about encouraging Americans to get out and vote... or else. Her opening statement played on that "do or die" theme. For Clinton supporters, this election is a make-or-break moment for the country. At the first debate, Clinton's opening answer was tied to economics and how detrimental she thinks Trump's tax plan would be.

If anything, Clinton has been good at remaining on message and making sure that her message is consistent every time viewers tune in to see her and Trump go at it. But this debate was different, not just because it was the last, but because both candidates are having some tough moments. Clinton's been fielding questions about her campaign's emails, which were leaked by Wikileaks this month, and looking to earn voters' trust. Trump has been plagued with scandals — from his tax returns to allegations of sexual assault. They both had little left to lose on Wednesday.

Despite all of that, Clinton was ready. Here are her full opening remarks:

I think when we talk about the Supreme Court, it raises the central issues in this election. What kind of country are we going to be? What kind of opportunities are we going to provide? For our citizens, what kind of rights will Americans have. And I feel strongly that the Supreme Court needs to stand on the side of the American people. Not on the side of the powerful corporations and the wealthy. For me that means we need to have a Supreme Court that will stand up on behalf of women's rights, on behalf of the rights of the LGBT community, that will stand up and say 'no' to Citizens United, a decision that has undermined the election system in our country because of the way it permits dark, unaccountable money to come into our electoral system.

I have major disagreements with my opponent on these issues and others that will be before the Supreme Court. But I feel that in this point in our country's history, it is important that we not reverse marriage equality, that we not reverse Roe v. Wade, that we stand up against Citizens United, we stand up for the rights of people in the workplace, that we stand and basically say that the Supreme Court should represent all of us.

That's how I see the Court and the kind of people that I would be looking to nominate to the Court. It would be in the great tradition of standing up to the powerful, standing up on behalf of our rights as Americans, And I look forward to having that opportunity. I would hope that the Senate would do its job and confirm the nomination that President Obama has sent to them. That's the way the Constitution fundamentally should operate. The president nominates and the Senate advises and consents or not, but they go forward with the process.

To prepare for the final debate, Clinton lightened her schedule and hadn't been on the campaign trail as much in the past few days. Whether that worked in her favor or not remains to be seen in post-debate polls. Trump's campaign manager Kellyanne Conway criticized the Democratic nominee for that strategy.

Conway said, "[Trump's] not taking five days off the trail like she is. That's her personal choice. I know scarcity is her strategy. The less people see her, the more they forget they don't like her, they don't trust her." Judging by Clinton's opening statement though, she doesn't seem to be too overly concerned that voters know what she's about.

As she has been in the past debates this year, Clinton was concise, policy driven, and ready to pick Trump apart. She's consistent, if nothing else.