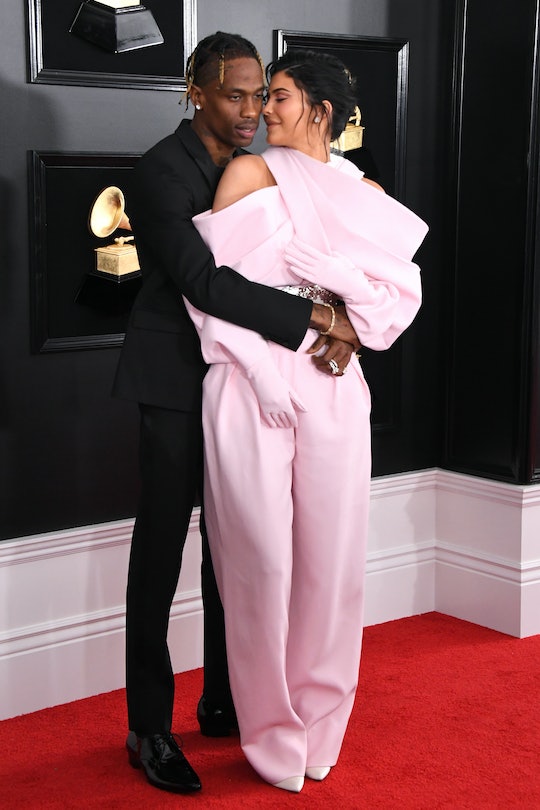 I own zero diamonds and I always figured I was fine with this. I never really considered diamonds to be a big deal in my life; I like to think I'm more of a George Bailey from It's A Wonderful Life kind of character; I'm rich with friends and love and stuff. Probably I still believe this, but it does rankle just slightly when a small child has more diamonds than I do and also appears to be as loved as little Stormi Webster. Travis Scott's gift for Stormi is so luxurious and extravagant it boggles the mind, and yet the little girl is walking around all casual like it's no big deal.

Stormi Webster, the daughter of Kylie Jenner and Travis Scott, turned one on Feb. 1, and of course her birthday celebrations were over-the-top. I mean, I don't even think calling it over-the-top is over-the-top enough, you know? Stormi had a "StormiWorld" birthday party which obviously means that herself was the theme and people entered the party through an inflatable tunnel that was designed to look like her face, as E! News noted. There was a carnival, a Stormiworld store to buy all of your Stormiworld needs... the list goes on.

If we could all take a moment to agree that the Stormiworld tunnel is slightly unsettling that would be great.

While Stormi's birthday has come and gone, the presents have not stopped rolling on in. Her father, rapper Travis Scott (whose real name is Jacques Webster), apparently decided she needed a little something extra. Something flashy. Something Marilyn Monroe once said are a "girl's best friend."

The Lip Kit mogul shared a video to her Instagram Story on Saturday of her little girl walking around her living room in a black cat t-shirt, black pants, and little running shoes. Oh, and a diamond necklace that Jenner said in the video Stormi's daddy bought her as a gift, as Harper's Bazaar reported. Please look closely at her gorgeous, tiny diamond necklace (when I say tiny I mean it fits around her neck, the diamonds are enormous) and pay attention to the lightning bolt featured on the clasp. I don't know for sure but I suspect the lightning bolt is all about Stormi's name on account of lightning happening during a storm, right?

Despite Stormi's new diamond necklace and her over-the-top birthday, friends close to the couple told Us Weekly that the little girl's life won't be as flashy as you might think:

They are really good, normal parents. Even though they have flashy lives themselves, they are trying to bring Stormi up to be as normal as possible.

I don't think Stormi's first birthday is necessarily going to be representative of whether or not her parents are going to spoil her. I think everyone probably spoils their baby on their first birthday; it's all relative, isn't it? While some of us might go a little nuts at Baby Gap, Travis Scott is buying diamonds.

It's fine. I'm totally fine with it.

More Like This
10 Baby’s First Christmas Outfits Cute Enough To Save For Their Kids
We Have To Talk About This Fish That Will Pat Your Baby's Butt Until They Fall Asleep
Can You Give A Sleeping Baby A Breathing Treatment? Experts Explain
Celebrate Baby's First Christmas With These 40 Instagram Captions