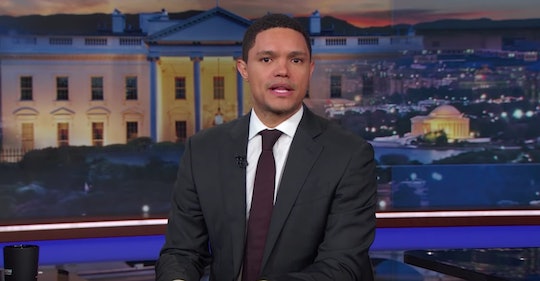 The Daily Show with Trevor Noah/YouTube

You'd think by 2018, the general public would recognize that mothers feeding their hungry babies is a normal, everyday occurrence. And considering a fair amount of moms breastfeed, they would logically need to feed their little ones in a public setting at some point or another. But nope. There are still plenty of weirdos out there who view public breastfeeding as lewd, inappropriate, and highly inconvenient for them in some way — and they have zero qualms about shaming nursing mothers for doing so. (Because apparently, they've never heard of simply looking away and continuing on with their lives.) Well, host of The Daily Show Trevor Noah's message to those offended by public breastfeeding is spot-on. In fact, it should be required viewing.

During a recent episode of The Daily Show, Noah tackled the topic of public breastfeeding head-on. In doing so, the talk show host managed to completely obliterate one asinine argument used often by those who harass nursing moms. "August is National Breastfeeding Awareness Month," Noah said to the camera. "For women who can do it, breastfeeding is one of the best ways to nurture an infant. And it's shocking that in 2018, we're still seeing stories like this." Cue: A montage of news reports featuring moms getting harassed for feeding their babies in public.

One of these news reports featured a mom who was having dinner while breastfeeding her baby, when a restaurant manager came over and asked her to cover up or breastfeed at the back of the store. "He stated that if it's my legal right, he can just whip out his penis and pee everywhere," the mom, Sarah Olson, told reporters, according to KIRO 7.

To me, it just sounds like that dude just wants an excuse to take is d*ck out. That's all it sounds like. He uses it for everything. He's like, "That guy turned right on red. If he can do that, then I'm gonna whip my penis out ... I can't do that? Okay, but next time ... Next time, it's on!"

LOL. It's so true, though! How is urinating in public mildly related to feeding a hungry baby? Where do people even come up with this stuff?

And the best part? The video's caption that read: "If you’re offended by public breastfeeding, maybe make like a hungry baby and suck it up."

In the comments section of The Daily Show's video, there were those select few who started their statements with, "I support breastfeeding, but ..." (Which, just no. If you need to qualify it with "only if they're discreet" or "as long as they cover up," you do not, in fact, support breastfeeding moms.) Thankfully, though, plenty of Facebook users made some valid arguments in favor of simply leaving breastfeeding women alone and carrying on with your day. One person wrote, "It's funny how so many people can be offended by women using their breast for what they intended to be used for...feeding babies!"

Another Facebook user commented, "If you feel like nursing should be discreet, then YOU be discreet while nursing. If you don’t want to cover up, then don’t. If you don’t like to see it, look away. The problem is not how other people nurse or feed their babies, the problem is you. It’s not your business. Move along. It’s not that hard."

Yet another person chimed in with, "These people saying it’s ok, but you should cover up and be discreet... Y’all are acting like woman do some kind of topless dance before feeding their babies."

Another Facebook user commented, "All women who want to breastfeed in public should have a few discreet blankets with them. Hand them out to the people who b*tch about seeing a bit [of] breast!" (Yeah, I'll second that.)

For the record, breastfeeding in public is now protected by law in all 50 states, according to People. (Utah and Idaho were the only states that lacked such laws for quite some time.) So it's about time businesses and managers at least catch up with the times so they're not, you know, breaking the law. As for the other random jerks who aren't in positions of power, I'm not sure there's much we can do to change their minds about breastfeeding — aside from getting them kicked out of places when they decide to harass moms and keep on spreading awareness that works to de-stigmatize public breastfeeding.

To nursing mamas, I say keep on keeping on. Because the more society as a whole is exposed to breastfeeding in public settings as NBD, the more people will take it for what it is — feeding a hungry baby. The end.

And kudos to Trevor Noah for calling out the idiots who think otherwise.