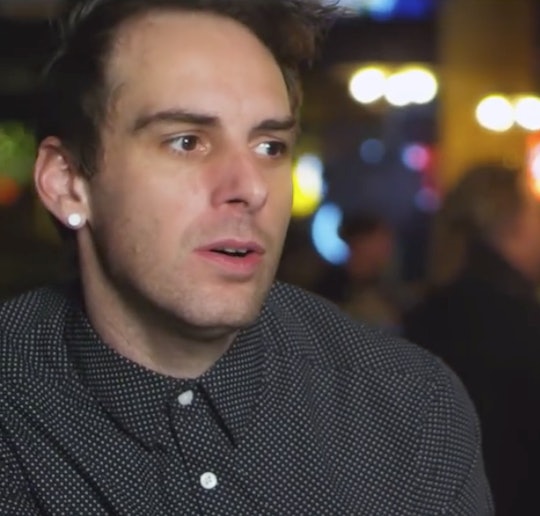 Trey Pearson's Coming-Out Letter Is Important For This Reason

It's no secret that some Christian religions are notoriously unfriendly and even hostile toward any romantic relationships that aren't between one man and one woman. While Americans' opinions as a whole have become increasingly more supportive of same-sex marriage even within the past decade, a lack of familial and social acceptance can make it incredibly difficult for LGBTQ Christian youth to come out and fully own who they are and who they love. That's why Christian rock star Trey Pearson's public coming-out letter is so important.

Pearson, the 35-year-old lead singer of the Christian rock group Everyday Sunday, shared his public coming-out letter with fans via Religion News Service on Tuesday. In it, he confessed that he "never wanted to be gay," and that he had tried to suppress his feeling for 20 years during and after growing up in a conservative household where he was taught that sexuality was a choice. "I was scared of what God would think and what all of these people I loved would think about me; so it never was an option for me," he wrote. "... I’ve tried my whole life to be straight." Because of that upbringing, Pearson eventually got married to a woman and had two children before finally admitting to himself that he was gay.

Pearson's admission comes just in time for the kickoff of LGBTQ Pride Month in June, which is considered a representation of optimism and pride now that same-sex marriage is legal under federal law thanks to a 2015 Supreme Court ruling. According to Vox, it all started out to cancel out the violence that some lesbian, gay, bisexual, transgender, and queer people were experiencing.

Gay Christians may struggle to find support within their communities more than those without strong religious backgrounds. While the Pew Research Center reported that U.S. Christian groups are becoming more tolerant of homosexuality, only 58 percent of Catholics and 27 percent of white mainline Protestants supported same-sex marriage in 2016, compared with 80 percent of the religiously unaffiliated.

The Christian idea that homosexual acts are sinful contributed to Pearson's inability to live as his authentic self for so long. He wrote:

Then I thought everything would come naturally on my wedding night. I honestly had never even made out with a girl before I got married. Of course, it felt anything but natural for me. Trying not to be gay has only led to a desire for intimacy in friendships which pushed friends away, and it has resulted in a marriage where I couldn’t love or satisfy my wife in a way that she needed. Still, I tried to convince myself that this was what God wanted and that this would work. I thought all of those other feelings would stay away if I could just do this right.

Pearson's honesty, coupled with his celebrity status — Everyday Sunday has sold about a quarter million albums since 2001 and toured in all 50 states, and his "Wake Up! Wake Up!" was the most-played Christian rock song in 2007 — has the potential to show young gay Christians that if someone they admire is OK with being gay, then they an be too.

The notion that representation is so important for marginalized groups is, after all, becoming mainstream. When onetime Olympic champion Caitlyn Jenner revealed that she was transgender and made her transition in the public eye last year, she aimed to position herself as a beacon for trans youth, a demographic that has disproportionately high suicide rates. In addition, the bisexual teen who launched the fantastic #GiveElsaAGirlfriend hashtag campaign has continued to urge Disney to portray the leading lady of its immensely popular Frozen as a lesbian in its sequel, in order to normalize same-sex relationships.

Although Pearson struggled with who he is for so long largely because of his faith, his story has a happy ending: He told The Washington Post that his conservative family reacted positively to the news, with his dad even showing up at his door expressly to give him a long hug. And even though he's not sure how the announcement about his sexuality will affect his career in Christian music, he knows it doesn't change how he feels about God, telling Religion News Service that, for him, there is "no conflict" associated with being gay and having faith. "God wants me to be healthy, authentic, whole, integrated and my truest self," he said.

Now that Pearson has come out, perhaps his decision will make it that much easier for others to do the same. The idea that young Christians may not feel like they need to hide who they are because of Pearson is, I'd imagine, incredibly satisfying for him. And the experience will surely inspire some new song material to spread the word even further.