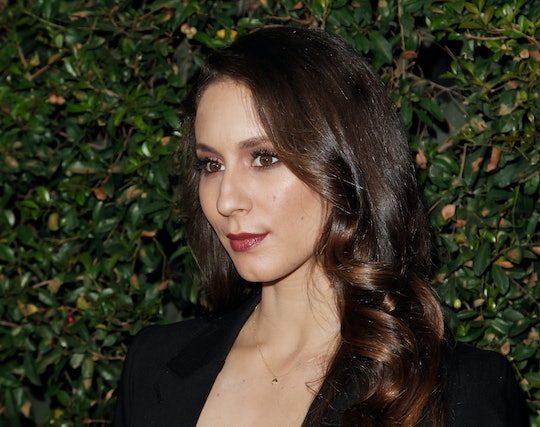 When Bellisario casually revealed her daughter's name on Instagram in October, I was a tad surprised. The name is gorgeous, in my opinion, but I didn't expect the director and actor to choose something related to Disney. Not that there's anything wrong with Disney princesses, of course, or that every Aurora is tied to the fictional one. I just assumed Bellisario and her husband, actor Patrick Adams, would pick something with more history attached to it, or something related to literature or film.

Well, it turns out Bellisario did go this route, revealing to Teen Vogue Aurora's moniker was inspired by Greek mythology. "We had a different name, and then we were considering boy's names, 'cause we didn't know what sex she was going to be," she explained to the outlet Tuesday. "And we were in Greece, so we were looking at a lot of Greek mythology, and we were like, 'Oh, if we have a son, maybe you should name it something having to do with the actual sun.'"

Helios' sister is named Eos, but the couple didn't "love" the name. So they were happy to learn that in Roman mythology, Eos translates to Aurora, "the goddess of dawn."

"And we thought it would be nice that she would be our dawning of a new day in our life, and then we were like, "Well, that's, you know, laden and cumbersome and really, like, a lot for a name,'" Bellisario recalled. "So we went back to our other names. [But] Aurora kept on cropping up in both Patrick and my lives. It just wouldn't go away."

Personally, I love this meaning because it has so much emotional weight and beauty wrapped up in it. And I used to be obsessed with Greek mythology as a kid, so there's that.

Although the new parents are happy with Aurora's name, Adams isn't too thrilled about the Disney princess connection. "But now it's really funny, because I didn't tell him that Aurora... he didn't know that Aurora was a Disney princess's name," Bellisario said about the coincidence.

As I mentioned earlier, there's nothing wrong with Disney princesses, and no one should feel shame or embarrassment about something they genuinely enjoy. But I can understand Adams feeling a bit "eh" about the whole thing since he wasn't initially aware of the connection.

Disney debacle aside, Aurora is a gorgeous name and it's relation to Greek mythology is even more special. A new dawn, indeed.