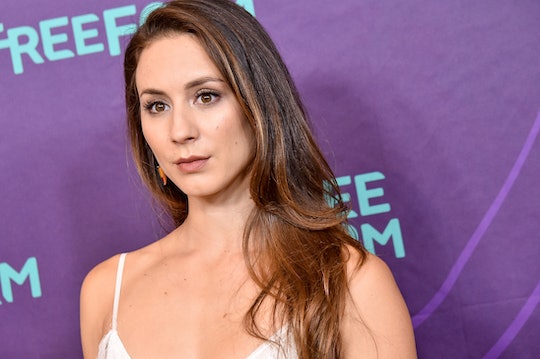 I think it's probably safe to say that most moms who choose to breastfeed have a bit of a picture in their heads about how that will look for them. Perhaps they imagine themselves content and well rested, nursing their little one in a rocking chair as they hum soft lullabies and feel the delicious weight of their bond all around them. I'm sure this works out for some people, but for many others, breastfeeding and pumping turns out to be decidedly more difficult than they probably expected. As Pretty Little Liars' Troian Bellisario's breastfeeding photo so eloquently pointed out, the entire process can feel a lot more complicated than you think.

Bellisario and her husband, Suits' actor Patrick J. Adams, have been married since 2016 and welcomed their daughter in October 2018, according to Harper's Bazaar. While the couple tend to be pretty private about their lives as a family of three (so private that they have yet to officially share their daughter's name), Bellisario took to Instagram on Tuesday, Aug. 6, to share a moving post in honor of World Breastfeeding Week.

At first glance, her post is an idyllic looking picture of her smiling down at her daughter as she breastfeeds. In other words, the picture so many moms have when they consider breastfeeding. But her words tell a different story. As Bellisario explained in her post on Instagram, she never thought something "so simple could be so complicated."

"My milk came in immediately (so lucky!) my daughter has always eaten well (little bit of reflux but all good) and breastfeeding her was never painful or frustrating (SO RARE) but the mastitis, waking up in the middle of the night to pump, pulling off on the freeway to pump, or hiding in dark corners of houses while pumping or else I can’t sleep it’s SO PAINFUL," Bellisario began on Instagram.

The actress went on to point out that she included a photo that was "the most glamorous I've ever looked while feeling like an effing cow," and also shared a photo of herself pumping breast milk in the bathroom.

While the new mom might be struggling with the ups and downs of breastfeeding — including not being able to "join in all of this cool CBD stuff that’s happening" — she remains happy about her decision. Although don't even try to convince her to like pumping, she is not a fan.

"But... no matter how much I HATE pumping or how complicated MY relationship with food is, it has been a joy, an honor and a no brainer to feed my daughter this way," she wrote on Instagram. "My body has made it easy for us and i have loved every moment i get to spend this kind of time with her. Not every mother gets that. I don’t know if I will have it for much longer, but I will always take care of her and do what is best for us. (Once again f*ck pumping. Love you forever babay girl)."

Bellisario's post will resonate with moms for a few reasons. First off, she admits that she was lucky enough not to have to suffer through some of the more difficult complications that can happen with breastfeeding, such as issues with milk supply or latching. But that doesn't mean it's not tough.

Bellisario is clearly loving motherhood, but hates pumping. Because this is the reality of parenting, isn't it? A whole bunch of conflicting emotions every day over every decision. But yeah... pumping does suck, she's not wrong.