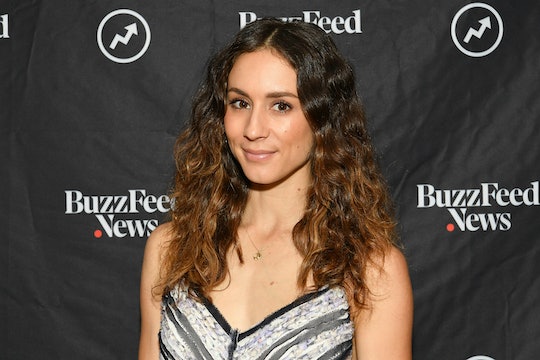 Troian Bellisario's "Sweatpants Phase" Is Every New Mom, Every Day

Troian Bellisario knows all about the glamorous world of entertainment. She is the daughter of mega-producer Donald P. Bellisario, she's an actress herself and she is married to Suits' actor Patrick J. Adams who even got to go to the royal wedding of Adams' former co-star Meghan Markle, no big deal. This gal has glamour downpat. But she's also a mom, so she's embracing a new kind of normal that the rest of us can all get behind. Troian Bellisario's "sweatpants phase" is not just a phase for every other mom out there, it's a literal way of life.

The Pretty Little Liars actress is mom to a 10-month-old baby girl with her husband of three years, Patrick J. Adams, but don't even bother asking what her name is because she's not saying yet. She is too busy trying to manage a hectic work schedule with being a mom, a wife, and everybody's best friend plus style icon on social media. It's a whole lot to juggle, but she seems to do it marvelously. Perhaps the key to keeping so many balls in the air is comfort. It seems that the super stylish star of Where'd You Go, Bernadette? is going through something of a style renaissance called wonderful, wonderful sweatpants.

Bellisario told In Style that it's a rare occasion indeed if she is dressed in anything beyond sweatpants these days simply because of the baby disaster that could follow:

I'm just getting out of the sweatpants phase. I don't know how my mom did it. She was a mom in the '80s, but I saw pictures of her in silk shirts and beautiful power suits. I was like, ‘Mom, yesterday, I put on a blouse for the first time, and within two seconds, there was breast milk and carrots all over it.’ It’s pointless to me. It’s a shocker if I wear jeans.

In fact, Bellisario opened up about her "complicated" relationship with breastfeeding in an emotional post in honor of World Breastfeeding Week recently, pumping in particular as she vented on Instagram:

waking up in the middle of the night to pump, pulling off on the freeway to pump, or hiding in dark corners of houses while pumping or else I can’t sleep it’s SO PAINFUL

While the new mom noted that she "loved every moment i get to spend this kind of time with her," that doesn't mean she's not above a little solo escape every now and then. So much so that she told In Style she's already warned her husband not to follow her if she takes off for Italy some day:

My daughter's only ten months, but I told my husband, ‘If I just jump on a plane to Italy, you can't follow me.’ And it's not malice towards him. It's not malice towards her. I just…there might be a moment where I'm like, 'Screw it, I’m booking my ticket.’ I totally get that need to disappear because, when you become the anchor point for somebody, when you work and have a family, you sort of miss this wild spontaneity and freedom you once had.

I totally get where Bellisario is coming from, that duality of being a parent. When you are more than happy enough to hang out in sweatpants and hunker down at home but a party of you also wants to leap on a plane and leave everything behind, if just for awhile.

I say leap on a plane for a weekend getaway and pack only sweatpants and you'll be sound as a pound.

More Like This
What To Know About Your C-Section Shelf
Pinterest Predicts Their Top 2023 Trends In Parenting, Beauty, Fashion, Home, & More
Breastfeeding & Sex: Experts Explain What To Expect
Mariah Carey Says She Has Never Called Herself The “Queen Of Christmas”