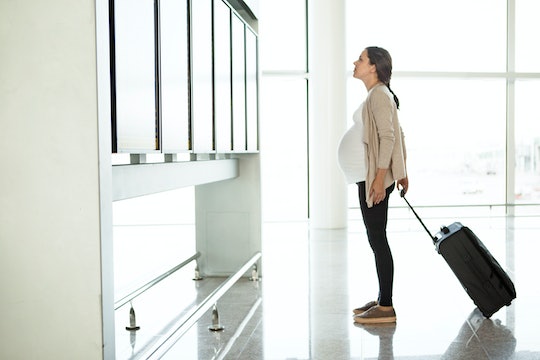 Pregnant Women Can Now Be Denied Visas Thanks To Trump Administration

It seems the Trump administration has found a new group of people to try to keep out of the United States: pregnant women. On Wednesday the State Department told American embassies that President Trump is restricting visas to pregnant women in an effort to halt "birth tourism." That's right, the government is trying to keep pregnant women from entering the country with a visa.

Romper has reached out to the White House for comment and is waiting for a response.

A news release by the State Department states that the government will no longer issue B non-immigrant visas to pregnant women (which are classified as temporary visits for business or pleasure rather than permanent visas) in an effort to curb what it refers to as "birth tourism." The State department defines this as "visiting the United States for the primary purpose of obtaining U.S. citizenship for a child, by giving birth in the United States." As of Friday, government officials issuing B visas at embassies around the world will be given the authority to deny pregnant women if they believe they are traveling to the United States to give birth there in an effort to gain citizenship for their child. Pregnant women will also be asked to prove that they will be able to pay for their own living expenses and medical care if they do plan on entering the country.

This rule applies only to women who are visibly pregnant, as per Slate. Officers are still not allowed to ask a woman if she is expecting, although there doesn't appear to be any sort of clear definition as to how these officers will determine whether or not a pregnant woman is traveling to the United States to give birth and remain in the country. As explained by White House press secretary Stephanie Grisham, per Vox, this move is "necessary to enhance public safety, national security, and the integrity of our immigration system. Closing this glaring immigration loophole will combat these endemic abuses and ultimately protect the United States from the national security risks created by this practice. It will also defend American taxpayers from having their hard-earned dollars siphoned away to finance the direct and downstream costs associated with birth tourism.”

Migration Policy Institute analyst Sarah Pierce told CNN that this new restriction will put officers in a "very awkward" position of being required to determine if a pregnant woman is due to give birth, also pointing out that people who are coming into the country as part of "birth tourism" are highly unlikely to come out and admit it. This new policy only extends to people from countries requiring a B visa, and the reality is that the 39 countries not required to obtain a visa are Western countries. Which could mean the "birth tourism" policy is targeting people of color.

There is an exception written into this new policy that would allow a woman to enter the country to give birth if her life or her baby's was at risk, but again this appears to be left up to the officer.

If that officer chooses not to honor this exception, people could potentially die.