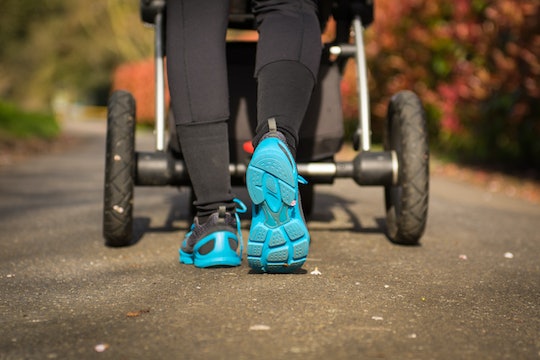 Although recalls — especially those pertaining to gear your baby uses — are always concerning to hear about in the news, it's good to know that action is being taken to remove and replace potentially unsafe items. However, a new report appears to uncover a more complicated layer to this ordeal. On Tuesday night, The Washington Post reported that a Trump appointee allegedly halted recall on Britax jogging strollers, despite at least 100 reports of injuries and crashes.

According to The Washington Post's report as well as a 2018 news release from the U.S. Consumer Product Safety Commission, the agency had received 200 consumer reports about the BOB jogging stroller from Britax. The complaints pointed to a problem with the quick release on the front wheel of the jogging stroller made by the South Carolina company and, according to The Washington Post, customers had reported that the wheel had a tendency to come off. And when the wheel comes off, the stroller careens over.

As the CPSC explained in the 2018 news release of the issue, "When the front wheel of the stroller detaches, the front fork can dig into the ground and cause the stroller to stop abruptly and tip over, posing a risk of serious injuries to children in the stroller and adults operating the stroller." And due to this issue, according to Consumer Reports, "about 200 people reported cases of the front wheel coming off during use, resulting in dozens of injuries."

Despite the reports, a recall was not issued at the time. In 2017, according to The Washington Post's report, the CSPC reached out to Britax about the complaints and asked the company to issue a voluntary recall of roughly 500,000 BOB jogging strollers. But Britax declined, saying that a recall "wasn't needed because the strollers are safe when used correctly," according to Consumer Reports. The CSPC sued Britax in an attempt to force a recall.

A spokesperson for Britax told Romper in a statement regarding The Washington Post's report, "The reason we did not agree to a recall of the pre-September 2015 jogging strollers was that they were not defective and were safe when used as instructed. Unlike the cited recalls in the article, the quick release design on our pre-September 2015 BOB jogging strollers has been used successfully around the world for decades in other products (e.g. bicycles)."

In February 2017, Ann Marie Buerkle took over as acting chairwoman of the CSPC, appointed by President Donald Trump, and that's when the push for a recall reportedly stopped, allegedly requested by Buerkle, according to The Washington Post. The publication's report alleges that Buerkle kept several Democratic commissioners in the dark about the difficulties with the BOB strollers and discouraged staff members from pushing for a recall.

A spokesperson for Buerkle told Romper in a statement that The Washington Post's report "concerning the Consumer Product Safety Commission’s settlement with Britax is misleading. Comments by former commissioners or others do not change the facts."

The statement continued, "The safety agenda of this important agency has remained the same — to seek the best solution in the shortest amount of time to help prevent unreasonable risks of harm to consumers."

Britax told Romper in a statement:

At Britax, we take safety very seriously and regret any injuries occurred while using our products. It’s unfortunate the Washington Post article characterizes the pre-September 2015 BOB jogging stroller settlement as simply politics. We worked with the article’s author to provide our prospective on the case, much of which did not make it into the article... Over many years we’ve invested significantly in educating consumers about the proper use of the quick release function. We have never been afraid to do the right thing and have taken action, when necessary, to voluntarily recall our products. Our customers will always come first, and designing products to transport children safely is built into our culture and almost 80-year heritage.

In November 2018, according to a CPSC news release, a lawsuit with Britax was settled, although the announcement did not "constitute an admission by Britax, or a determination by the Commission, that BOB jogging strollers contain a defect or are a substantial product hazard." Instead, according to the CPSC, "Britax will develop and launch an information campaign that will include an instructional video demonstrating how to safely and correctly operate the quick release on the front wheel of the strollers."

Regarding the CPSC's settlement with Britax, the statement said it was approved "upon the staff’s recommendation, keeping in mind the agency’s experience in valuing a settlement much sooner than a prolonged, protracted, and uncertain lawsuit."

Beyond the instructional video, if parents are worried about their stroller, they have a few options, as the CPSC outlined.

First of all, if you purchased a 3-wheel BOB gear stroller, either single or double, that was manufactured between Jan. 1, 2009 and Sept. 30, 2015, you are eligible for a free modified thru-bolt or free modified quick release that can be installed on strollers. Or, you can receive a 20 percent discount on a new BOB gear stroller.

Editor's Note: This article has been updated to include Buerkle's statement.