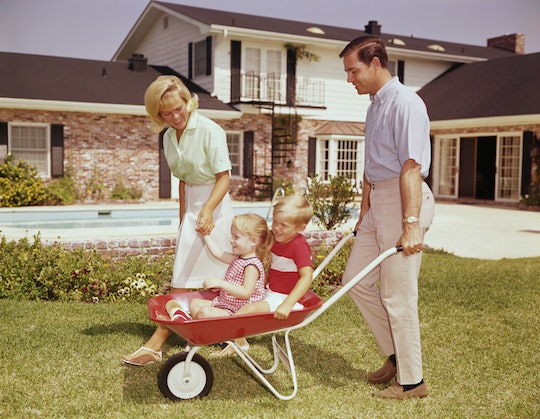 I am *the* suburban mom. I have two kids and a spouse, a dog and a cat. We all live in a two-story home full of sparkly ceramic pumpkins and our backyard littered with scooters and wagons and swing sets and a technicolor inflatable pool with unicorn sprinkler. My neighbors and I routinely meet in the street to drink Costco sangria out of monogrammed coffee tumblers while our kids ride their bikes and climb trees. We live two miles away from our city's downtown area, which hosts Christmas and Halloween activities, food truck nights, and art festivals. I drive there in my minivan.

I am white. I come from a family of privilege. I'm secretary of our school's PTA. I am exactly the kind of suburban mom President Trump thinks he's going to appeal to with his offer of protection and his embrace of "law and order" — which of course means defending "vigilantes" that shoot people and dire warnings that Democrat-run cities and states will turn into fiery infernos without police on every corner. At a rally in Pennsylvania, Trump made a plea. "Suburban women, will you please like me?" he asked. And I'm here to say — no we f*cking will not.

Out here in the land of painted brick homes and SUVs, we take care of each other. And there has yet to be one moment in my suburban dreamland that I woke up in the night worried about hordes of undesirables moving into my neighborhood, as invoked by Trump when discussing residential zoning. Instead, I'm worried about the kids in my daughter's school relying on free breakfast and lunch and moving to a full digital curriculum. I'm worried about the local toy store owned by a woman of color in our town having to close down because of the Trump administration's response to COVID-19. I'm worried about white supremacists interrupting a Black Lives Matter demonstration outside of the pottery studio where my 6-year-old painted me a Mother's Day mug.

The desire to have a yard is not incompatible with inclusive beliefs.

From Sarah Palin's overture to "soccer moms" in 2008 to now, republicans have long fixated on the (white) suburban mom vote, even as the suburbs have grown increasingly diverse. That has been an effective strategy in the past, but in this election, Trump and the GOP are absolutely losing this demographic.

We suburban moms aren't living in whitewashed towns anymore. We may still have considerable work to do in making our communities more diverse, but our children are no longer surrounded solely by people who look like them. Those very white suburbs of the past were the result of racist laws and mortgage lenders and privilege so thick that white people could stand on it to hang their Pottery Barn curtains as Black and brown people were denied loans and a chance at homeownership. But now things are (slowly) changing. And the fact that we suburban moms — educated, ambitious, hyper attuned to when someone is blowing hateful smoke up our derrieres — welcome it is the thing Trump and his cronies can't even begin to understand.

As cultural touchstones go, few figures are even close to as familiar and influential as the suburban white mother. She's a stereotype, a propaganda figure, and our most widely recognized symbol of American domesticity. We call women June Cleaver when they want to bake homemade cookies and sew napkins. Depending on who you are and how you grew up, the suburban mom either represents insulated white conformity or respectability, nurture, and safety. Either way, for many people she is synonymous with America and home.

But she is also a mostly unacknowledged explorer of who we could be, what we value and how that's changing. A quick tour of family sitcoms over the last 60 years reveals countless instances of the suburban mom challenging social and political norms.

Whether or not their real-life counterparts were as openminded, TVland's suburban moms demonstrated that the desire to have a yard is not incompatible with inclusive beliefs.

Laura Petrie, played by Mary Tyler Moore on The Dick Van Dyke Show, wore pants because, as Moore said in 2004, "Women don't wear full-skirted dresses to vacuum in." While history has preserved Donna Reed as the quintessential high-heeled vacuumer, in 1963 Reed herself pointed out the ways her character had challenged stereotypes about "the All-American mom." On her sitcom The Donna Reed Show, the character openly resented the term "housewife" and spoke of the independent life she had before she was married. She also retained interests outside of her home.

In a 1970 Bewitched episode, stay-at-home mom and witch Samantha Stephens used her powers to teach her husband's boss a thing or two about racism (an episode, by the way, written by a Los Angeles high school English class). In a 1974 episode of Happy Days, Howard Cunningham brought home a Black soon-to-be-married friend who was treated so poorly by the Cunninghams' neighbors, a police officer, and his own father-in-law, that Marion Cunningham overcame her own embedded prejudices to host his wedding in their own home.

Despite the fact that TV has presented us with more than a few examples of the evolution of American motherhood, the stereotype of the suburban mom persists. And it's meant to undermine us, to make us sound like pearl-clutching, afraid-of-the-city women who follow QAnon and vote for whoever our husbands say is the right candidate. "I don't get into politics," we're supposed to say when someone mentions the election. We just need to stir the Kool-Aid and put out the cheese platter and ask each other about our latest Target Dollar Spot finds.

Nothing could be farther from the truth.

In the city my family lives in and loves (in Georgia, y'all), white people make up 42.8% of the population. We are 24.6% Black, 23.9% Asian, and 13.8% Hispanic, according to the U.S. Census. I work on our PTA brochure, and our board makes sure to simplify what we want to say so we have room to put it in four languages on the pamphlet: Spanish, Korean, Vietnamese, and English. My neighbors and I brainstorm ways to help the families who are learning remotely in which the children need help, but the parents don't speak English. Our local community steps up the minute we hear someone is in need — "I've got girl clothes in size 4T, I'll drop them off at your house." "Do they need school supplies?" "Let me know where to send the Publix gift card." — and not once have I ever heard a person in my suburb ask why.

Trump misunderstands us. We don't live here because we want a Stepford existence. We live here because we want the trick-or-treating and the community and yes, a yard. Things that are better because they have changed since the 1950s, and it's because of our life here in the suburbs that I can't vote for Trump. Because anybody who's willing to bring racism and misogyny back into actual paradise has no room on our sidewalk.