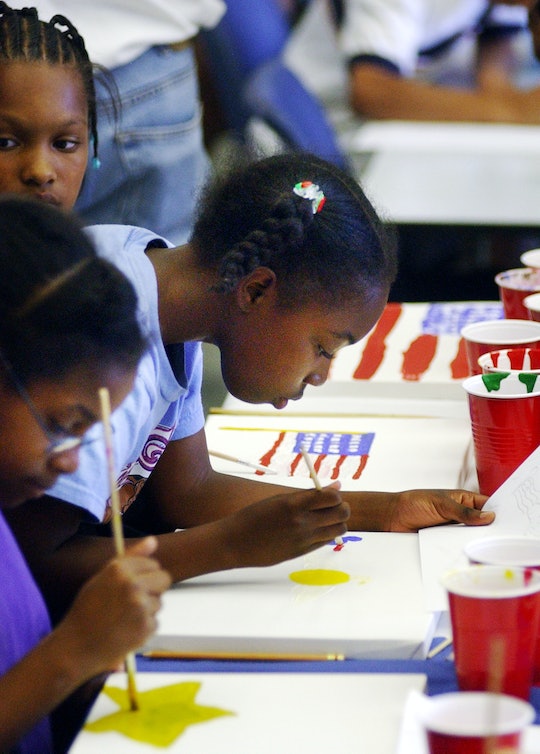 The White House released its proposal, “America First: A Budget Blueprint to Make America Great Again,” online Thursday morning, including some $54 billion in cuts to federal agencies and partnerships that would end if President Donald Trump’s budget comes to pass. In order to pay for a dramatic increase in military spending, Trump has proposed some of the sharpest cuts to programs for foreign aid, scientific research, education, and assistance to the poor and elderly since the early ‘80s, according to the Washington Post. And parents may be among many raising serious concerns over the spending plan, as several of the programs and agencies eliminated under Trump’s budget go directly toward supporting kids’ education and safety. The White House did not respond to Romper's request for comment regarding how these cuts will affect children.

None of Trump’s plans for the federal budget come as a surprise, given the extreme rhetoric and promises he made to supporters while on the campaign trail. In a statement that accompanied the plan, the president’s budget director said that the budget translates Trump’s “words into numbers” and reflects the overall direction of the administration’s spending goals: budget reductions of 20 percent at the Departments of Labor, Agriculture, and State — and a 30 percent reduction in the EPA budget — pay for historic boosts in the budgets for Defense and Homeland Security, the agencies responsible for Trump’s immigration and border security plans.

Even as a manifesto of Trump’s spending and management goals, the plan is telling. If given the opportunity, not only would the Administration strip billions of dollars from cabinet-level agencies, it would eliminate several federally-funded agencies related to kids’ education and development. If enacted, the impact that Trump’s budget would have on kids would just be cruel.

Here are some of the agencies that would get the axe under the Trump fiscal plan:

The plan eliminates $485 million in federal funding for the Corporation for Public Broadcasting, effectively ending support for public television and radio stations. That includes the PBS television network and indirect funding for National Public Radio.

Institute Of Museum And Library Services

The nation's 123,000 libraries and 35,000 museums would suffer under the president's budget, as it would eliminate the Institute of Museum and Library Services. With a budget of $231 million, the agency also helps to sustain local children's museums, botanical gardens, planetariums, and zoos.

National Endowment Of The Arts

Young people interested in pursuing the arts could have fewer opportunities to cultivate their talents, under Trump's proposal. The National Endowment for the Arts is on the list of agencies set for elimination — and with it, the agency's support for school and local arts programs.

National Endowment Of The Humanities

At the same time, programs that encourage children to learn about history, literature, and culture would take a serious hit as the National Endowment for the Humanities would be eliminated. The agency receives $155 million in federal funds.

Finally, the proposal would reclaim $4 million allocated for the U.S. Interagency Council on Homelessness, the independent agency responsible for coordinating the federal government's efforts to reduce homelessness — including helping to direct resources to the 1.3 million kids who live on the streets, in shelters, in abandoned buildings, or with friends each year.

Some are already saying that the president’s proposal has little chance of becoming reality, and may actually be dead on arrival in Capitol Hill. A New York Times report pointed out that the appropriations process means that, though in the minority, House Democrats have enough leverage to reshape the budget before it becomes law, and Senate Democrats have the votes to block the bill entirely. That may matter little to Trump, who stands to win either way: If lawmakers vote down the austere measures, crammed with the miserly, unrealistic promises Trump made to supporters during the campaign, Trump can tell his supporters that it was “the swamp” — an ineffective and obstructionist Congress — that ate his big plans for government. Even if the president doesn’t get to wield the most severe set of federal spending cuts in recent history, he gets the perfect enemy to beat up on in the media.

But prospects aside, the White House budget manifesto tells America exactly what Trump would axe if given the opportunity. In America First, the Trump administration has made it painfully clear to America’s parents that having a well-rounded education simply isn't a priority. And while it's true that arts and humanities programs make kids better readers and thinkers, under Trump, grooming the next generation of leaders while be that much more difficult.