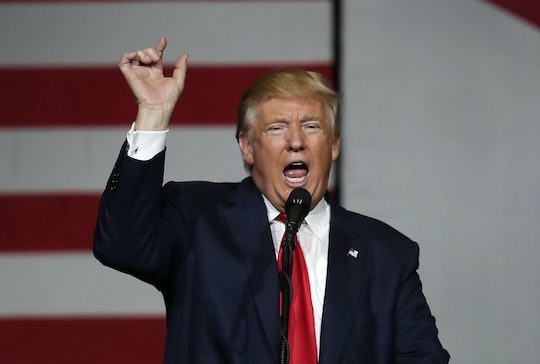 If anyone needed further proof that GOP presidential candidate Donald Trump's default defense strategy is redirection, here is another classic example. As Trump's campaign continues to slowly circle the drain, he is lashing out, pointing the finger of blame at everyone but himself. His latest feat of misdirection? Trump claims the media isn't reporting on Clinton's WikiLeaks email scandal. And just like every other toddler out in the playground pointing to someone else and wailing, "No, he did it!", Trump is utterly wrong.

Democratic presidential candidate Hillary Clinton and her campaign chairman, John Podesta, have been busy over the past few days as WikiLeaks shared thousands of emails from Podesta's Gmail account (and WikiLeaks has promised to release the rest of the reportedly 50,000 emails it has obtained every day until election day). The emails are pretty damning; One email entitled "Needy Latinos" finds Podesta urging Clinton to court former Energy Secretary Fedrico Pena, while others hint that Clinton was laying the ground work for her campaign much earlier than voters were lead to believe. In general, the emails (few of which were sent from Clinton herself) paint a picture of a careful, cautious candidate who worries endlessly about the way she is perceived by the public.

(See, Mr. Trump? We all know about the WikiLeaks email scandal. No need to worry.)

At a rally on Thursday, Trump ranted on an on about the supposed lack of coverage the mainstream media has given to the WikiLeaks email scandal. He complained that, while the "dishonest" media hasn't discussed the Clinton leak, “if I sneeze, if Donald Trump sneezes today, it’s a major story.”

I personally don't think a sneeze from The Donald would be all that newsworthy (although if memory serves, I believe his camp tried to make Clinton's recent unfortunate bout of pneumonia into a pretty serious federal case). But for the record, here is a list of major media outlets actually covering the Clinton WikiLeaks, despite what Trump and his camp claim.

These are just a few of the media outlets reporting on Clinton's email story; This list doesn't take into account the innumberable non-mainstream media outlets doing their due diligence and reporting on the WikiLeaks controversy as well. (You can count Bustle and Romper among them.)

There have been leaks on both sides of the campaign trail, and they have both been covered in the media, because these leaks, whether we agree with them or not, give us a bird's-eye view of the way the presidential candidates comport themselves behind closed doors. In the case of Hillary Clinton, we see a candidate who is secretive, and anxious of her public perception, and careful with the information she shares with the public.

In the case of Donald Trump, we see a misogynist who cracks jokes about allegedly sexually assaulting women and brushes his behavior aside as "locker room banter"(a leaked audio conversation of which, obtained by The Washington Post, has since gone viral) and a tax return that could ostensibly mean that he avoided paying millions of dollars in taxes for years (Trump's 1995 tax return was leaked to The New York Times).

Neither situation is ideal. But Trump's dangerous disregard for others and his utter refusal to take responsibility for his actions is far worse. Coupled with the fact that his camp is now blaming media outlets for something they are, in fact, covering, it's a desperate look overall.