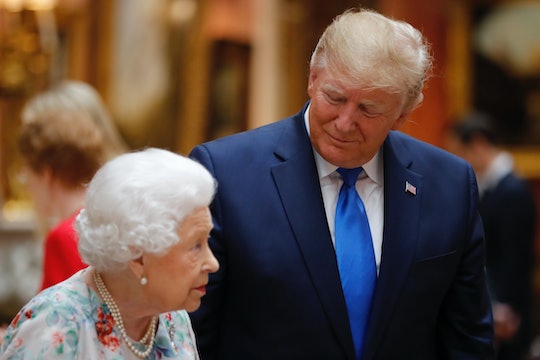 Another day, another tweet. And this time, in a tweet casting blame on the "Fake News Media," President Donald Trump denied calling Meghan Markle "nasty," despite the fact that there’s audio of him using the word while discussing the Duchess of Sussex with a reporter.

Trump made the concerning comment about Markle in an interview with The Sun in the Oval Office ahead of a planned trip to the U.K. to visit with the Queen, according to the Associated Press. During the interview, a reporter for The Sun had asked Trump if he was "sorry" that he'd miss out on meeting the Duchess of Sussex, who gave birth to her son Archie on May 6, due to her maternity leave.

"Are you sorry not to see her because she wasn't so nice about you during the campaign. I don’t know if you saw that," the reporter said to Trump. (As a refresher, ahead of the 2016 presential election, Markle had called Trump "divisive" and "misogynistic.")

The reporter went on to explain that Markle had said she’d move to Canada (where her show Suits was filmed at the time) if Trump were elected. To which Trump replied, "A lot of people are moving here. So what can I say? No I didn’t know that she was nasty."

After Trump's comment went viral, the POTUS penned a tweet denying he called the Duchess of Sussex "nasty," and instead suggesting his comment was perhaps taken out of context by the media. On Sunday, June 2, Trump tweeted, "I never called Meghan Markle 'nasty.' Made up by the Fake News Media, and they got caught cold! Will @CNN, @nytimes and others apologize? Doubt it!"

You can listen to the audio in its entirety here. Nobody in the royal family has yet to comment on the POTUS' remarks,

Though it's unlikely that the Queen or Markle's husband Prince Harry will issue any response to the Trump's interview, the Duchess of Sussex on the other hand has been known to bend some royal protocol. The Bay Area’s Mercury News reported that "members of the royal family are not supposed to publicly voice political views,” but Markle has long been open about being a feminist and other issues she's passionate about, even after joining the royal family.

But Markle wasn’t the president’s only focus as he prepared for his trip to London. In the early hours of Monday, he tweeted that London's Mayor Sadiq Khan "by all accounts has done a terrible job" and "has been foolishly 'nasty' to the visiting President of the Unites States.” Trump went on to call Khan a "stone cold loser."

But, justifiably, the comment aimed at Markle is making headlines, largely because it's part of a larger trend of misogynistic comments coming from the president. Trump has called both Hillary Clinton and Markle “nasty.” He once called Omarosa Manigault “that dog” and Rosie O’Donnell a “pig.” In 2017, Trump called Sen. Kristen Gillibrand a “lightweight.”

Why Trump is attempting to walk back his caught-on-tape comment toward Markle this time is anyone’s guess. The POTUS will be visiting England for the next three days, so only time will tell if Markle breaks protocol and issues a fierce response.