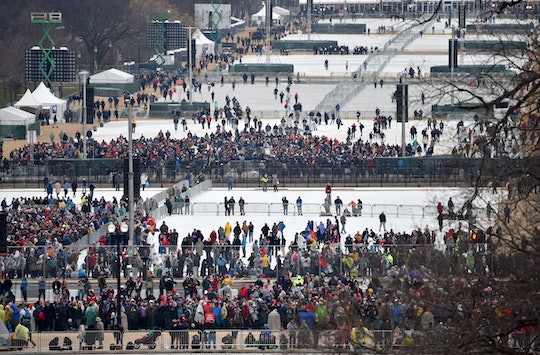 The Best Of The Best Trump Inauguration Memes

It's official — the Inauguration of Donald J. Trump is actually happening. He is really going to become the 45th President of the United States (I can't be the only one that was hoping for some kind of miracle re-count, right?) and the internet is taking no prisoners during the "celebration." Trump Inauguration memes are filling up your social media feeds to make you laugh, cry, and laugh while crying.

I mean, the entire election has been a joke, right? It's funny, but it's also heartbreaking to watch Saturday Night Live poke fun at the future President of the United States without having to, you know, actually write any of their own jokes. The Trump inauguration memes making their way around your social media are the same way. It would've been a funny meme to write that Three Doors Down is the headline act at the Inauguration concert, but um — that's actually the headline act. At this point, you could just slap news from the Inauguration on to a meme and call it hilarious. And then you could cry yourself to sleep.

So in an effort to help spread some of the happiness (and a little bit of pain, not going to lie), use these Trump inauguration memes on your own social media feed. And maybe in the morning, Lorne Michaels will tell the world this was all just one big giant joke. (I hope.)