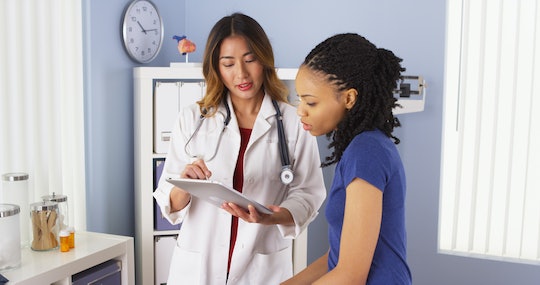 Heads Up! You May Lose Your Birth Control Coverage Because Of Trump

With the controversial passing of his signature health care legislation, the Affordable Care Act (ACA), back in 2010, President Barack Obama made huge strides in protecting women's reproductive health by requiring that they have access to free birth control through their insurance. Now, though, that crucial provision of the ACA is in trouble, as President Donald Trump is reportedly rolling back Obama's birth control mandate — even though his party's recent attempts to dismantle the ACA as a whole failed. And if the Trump administration does indeed impose new regulations allowing a much broader swatch of employers to exempt themselves from providing birth control coverage based on religious or moral convictions, hundreds of thousands of people could lose the demonstrated health and family planning benefits of having easy and no-cost access to contraceptives.

The New York Times first reported Thursday night that the change to the nation's health care landscape could come as soon as Friday. And if it does, the new rules, ostensibly a bid to protect employers' "religious freedom," would go into affect immediately. Which means, of course, that women all over the country could go from enjoying free birth control coverage to having to take on the additional burden of a copay pretty much overnight. To make its case, the Times reported, the Trump administration included in its new rules health risks associated with some contraceptives. It also asserts that such easy access to birth control could give young people the green light to engage in "risky sexual behavior" (as if there aren't programs like, oh, I don't know, sexual education in high school, that could prevent that).

In potentially slashing the ACA mandate that birth control be fully covered in most cases, the Trump administration is fulfilling a campaign promise to religious conservatives such as the Little Sisters of the Poor who believe that supplying birth control to employees ropes them into committing a "grave sin." Which is why the original ACA mandate inspired a slew of lawsuits by nuns, charities, hospitals, and universities, which ultimately forged the way for houses of worship, religious nonprofits, and for-profit companies with "closely held" beliefs to gain exemptions to the rule, according to The Washington Post.

And the ways in which the Trump administration's reportedly upcoming rules would broaden those exemptions could certainly affect you: For-profits — even those owned by shareholders — would also be permitted to exempt themselves, the Times reported, as would "nonreligious nonprofit organizations" like the March for Life. And these organizations would not even have to notify the government that they were exempting — they'd just have to let their employees know.

This is terrible news for so many of the 55 million women who have free access to birth control and other preventive services thanks to the ACA. Additionally, The National Women's Law Center reported that the implementation of the ACA mandate resulted in 5 percent more women filling their birth control prescriptions in 2013. And it's saving them significant cash: One recent study concluded that women who take get free birth control pills through their insurance save an average of $255 annually, and those with IUDs save $248 each year.

Further, birth control is proven to be a safe and effective means not just to prevent pregnancy, which is a good enough reason to make it as readily available as possible all on its own, but to treat tons of other health issues as well. According to Planned Parenthood, birth control pills are often instrumental in helping to reduce or prevent bone thinning, cysts in the breasts and ovaries, endometrial and ovarian cancers, infections in the ovaries, fallopian tubes, and uterus, iron deficiency, PMS, and acne. It's safe, it's convenient, and it gives women the freedom to live their lives the way they want to.

Republicans already tried and tried and tried to strip women of their reproductive freedom by legislatively dismantling the ACA entirely — and they failed. These reported new "religious freedom" rules would again threaten women's bodily autonomy, meaning that it's again time to fight like hell against the government's latest attempt to control us and expose us to unnecessary risk.