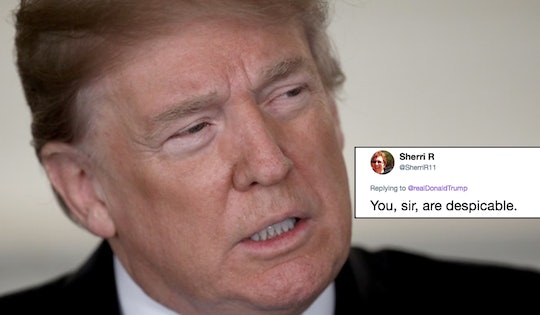 It's tragic that in the wake of the school shooting in Parkland, Florida that the only people who seem to be speaking about actual change are the teenage victims of the gun violence. Because no one in Washington sure is, especially the president. Late Saturday night, Trump tweeted about the Florida school shooting and shifted the focus away yet again from gun reform and pointed fingers elsewhere. This time, it was the FBI and special counsel Robert Mueller. Romper's request for comment from the White House about Trump's tweet storm this weekend was not immediately returned.

As previously reported, fellow students warned administrators about the shooter, according to The Hill, he had been accused of hitting and stalking a girlfriend, and the FBI had even once investigated him after he made threatening comments, though they were unable to stop him at the time. In Trump's first response to the shooting, he focused on the first two things: that the teen was known to be "unstable" and blamed mental illness, not the fact that the kid could get an AR-15 rifle with his history if violence, for the shooting.

But that must not have been sitting right with him. According to The Washington Post, Trump is "ensconced" at Mar-a-Lago (but not golfing, out of respect for the shooting victims), where he dined with his sons and Geraldo Rivera before retiring to his room for a series of tweets about the FBI's investigation in possible Russian collusion.

He wrote, "Very sad that the FBI missed all of the many signals sent out by the Florida school shooter. This is not acceptable. They are spending too much time trying to prove Russian collusion with the Trump campaign — there is no collusion. Get back to the basics and make us all proud!”

People Were Not Pleased

Trump's tweets are appalling for a few reasons. For one, it's pretty scary that the president seems to be at war, as Vox put it, with his own Justice Department and the FBI, which is only doing its job. The law enforcement agency has been investigating Trump's 2016 election campaign and any possible collusion with the Russian government.

In addition to the tweet conflating the investigation and the Florida school shooting, he also fired off another storm of tweets maintaining his, and his campaign's, innocence. His obsession with the Russian investigation and not just letting the FBI do its job peacefully is very disturbing.

So is the fact that his tweets seemingly blaming the FBI for the shooting is abysmally tone deaf given the fact that the entire country and begging for someone in charge to do something already about the amount of gun violence in the country. The Florida teenagers who were the victims of the shooting have been spending all of their time talking to the media and posting on Twitter about their desire for change, pleading with Trump and law makers to act quickly.

While these teenagers are doing all of this emotional labor at a time when they are also mourning their classmates, it's unthinkable that Trump would use the opportunity to get a dig in at the FBI, Democrats, and politicize the situation in any way. The only way to bring politics into a tragic school shooting should be to enact stricter gun laws and background checks, plain and simple. Not to blame students for not reporting their friend or "mental illness," which is not a predictor of gun violence in any way, or the FBI.