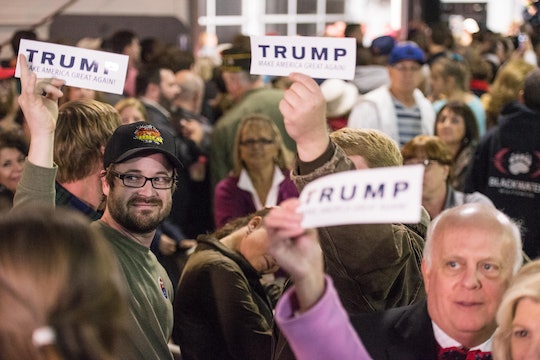 Donald Trump, the current leading Republican candidate to be the next U.S. president (reminder: no, you're not reading The Onion, that's a real fact), believes he has the solution to deterring would-be terrorists from entering the country. On Monday, Trump called for a travel ban for all Muslims looking to enter the United States, citing erroneous statistics on the proliferation of the jihadist movement in America. Trump’s statement stunned the political world and did something that would have been impossible under most circumstances: It unified politicians on both sides of the aisle who rushed to issue statements blasting Trump’s message as racist and irresponsible.

“Donald J. Trump is calling for a total and complete shutdown of Muslims entering the United States until our country’s representatives can figure out what’s going on,” the Trump campaign said in a press release. The Republican frontrunner went on to cite figures from the Center for Security Policy, which claimed that 25 percent of Muslims polled believe “violence against Americans here in the United States is justified as a part of the global jihad” and 51 percent agree that “Muslims in America should have the choice of being governed according to Shariah law.” A Trump spokesperson told CNN that the ban would apply to Muslim tourists as well as those looking to enter the U.S. permanently.

Trump’s press statement is the latest in a series of inflammatory anti-Muslim proposals that the GOP hopeful has touted in recent weeks, including his call for a registry for all American Muslims and heightened surveillance of mosques for terrorist activity.

Some of the best responses to Trump’s proposal to ban Muslims traveling to the U.S. came from people who called out this blatantly absurd remarks as a form of prejudice.

Republican Candidates Called Trump “Unhinged” and “Unsuited” To Be President

Even Lindsay Graham Said Donald Trump Should Go To Hell

Still, Some Responses Were Great For Other (Funnier) Reasons

But some of the responses to Trump’s so-called plan were almost as bad as the candidate’s own words.

Of Course, There Were People Who Rallied Behind Trump

Despite the backlash from all sides, Trump only doubled down on his anti-Muslim campaign during a Tuesday morning interview with CNN’s Chris Cuomo. Trump, who phoned in for the live interview on CNN’s New Day, warned that without his temporary ban, the country would be facing deep danger. “You're going to have many more World Trade Centers if you don't solve it — many, many more and probably beyond the World Trade Center."