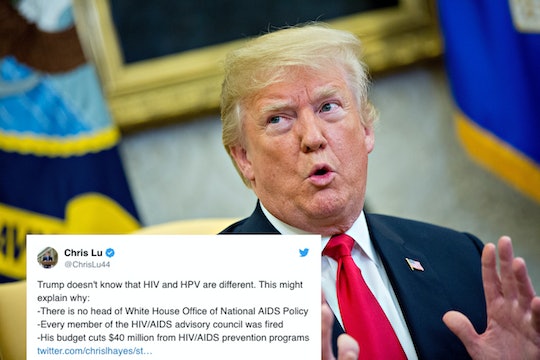 Trump Reportedly Doesn’t Know The Difference Between HIV & HPV, & Twitter Is Having A Field Day

It's understandable when people mix up certain acronyms. Take CIA, for example: Sure, everyone knows it's the Central Intelligence Agency, but it also stands for the Culinary Institute of America. Then, there's ACS, which, other than my initials, stands for the American Chemical Society, the American Cancer Society, the American College of Surgeons, and the New York City Administration for Children Services, among a bunch of other organizations. But there are two acronyms no one should ever confuse, especially President Donald Trump: HPV and HIV. Yet Trump reportedly doesn't know the difference between HIV and HPV, and of course, Twitter is having a field day.

"Wait," you may say to yourself. "How does he not know? And how do we know he doesn't know?" Two very valid questions. I have no answer for the first one, but the second is easy: Bill Gates. The Microsoft founder told a crowd during a Q&A session at a recent Bill and Melinda Gates Foundation event that he had to twice explain to Trump the difference between HPV — human papillomavirus — and HIV — human immunodeficiency virus — according to The Washington Post. Needless to say, people had thoughts.

A video of the Q&A portion aired Thursday by MSNBC's All In With Chris Hayes, in which Gates told the audience while recalling both meetings, according to The Washington Post:

Both times he wanted to know if there was a difference between HIV and HPV, so I was able to explain that those are rarely confused with each other.

Gates added that Trump reportedly also asked "if vaccines weren't a bad thing because he was considering a commission to look into ill effects of vaccines." The billionaire told the crowd that he said, "'No, that's a dead end. That would be a bad thing, don't do that," The Washington Post reported.

Here's the thing: Gates is not wrong. Rarely do people confuse HIV for HPV and vice versa. If you did a Google search for HIV, you wouldn't get a prompt that reads, "Did you mean HPV?" It's just not a thing. Why? Because the United States has been fighting a HIV/AIDS epidemic for the nearly four decades, according to the Kaiser Family Foundation. The federal government has established programs and departments dedicated to HIV/AIDS research, outreach, and treatment — never mind all of the non-profits and scientific organizations formed in response to the HIV/AIDS crisis.

There was even a Presidential Advisory Council On HIV/AIDS, but Trump fired all of the remaining members in December, according to Huffington Post.

Then, there's the fact that HIV and HPV are two completely different acronyms that have two letters that are eight letters apart in the alphabet. It's somewhat excusable if Trump doesn't fully understand what HPV is, although it's not complex to understand and he, as the president of the United States, should know what it is. If you need a refresher, though: HPV is a multi-strain sexually transmitted infection that affects 80 million people, and typically goes away on its own, according to the U.S. Centers for Disease Control and Prevention. Certain HPV strains can cause genital warts, or, worse, cervical cancer, which can be prevent with the HPV vaccine that a recent report proved is effective in that capacity, according to CNN.

But what makes Trump's ignorance to the differences between HIV and HPV concerning is how dead set he is on dismantling abortion rights, which will undoubtedly affects HIV and HPV prevention and treatment services. The Trump administration plans on introducing a domestic gag rule that will deny federal funding to clinics, such as Planned Parenthood, if they provide abortion services or information and referrals for said services, according to The New York Daily News.

Losing that funding can have dire consequences. Conservative attacks on reproductive rights have already lead to higher HIV rates in certain areas. In fact, that happened in one rural Southern Indiana county thanks to Vice President Mike Pence's public health funding cuts in 2013 while he was governor of the state, according to USA Today. As clinics closed, people living in that rural Indiana town lost its only clinic that provided access to vital HIV screening and prevention tools, and the state didn't replace it as it said it would, USA Today reported. That lead to nearly 200 new cases by 2016.

Planned Parenthood also provides screening, prevention, and treatment services for HPV. If Planned Parenthood or similar clinics close in small towns, that means people — especially young kids — not only have an increased risk of contracting HPV, but also of developing cervical cancer. Imagine those rates.

So while the knee jerk reaction is to mock Trump's ignorance, his inability to distinguish between the two is both disturbing and scary. Lives can be forever changed by these diseases in different ways, and the country needs a president who gets that, without any confusion.