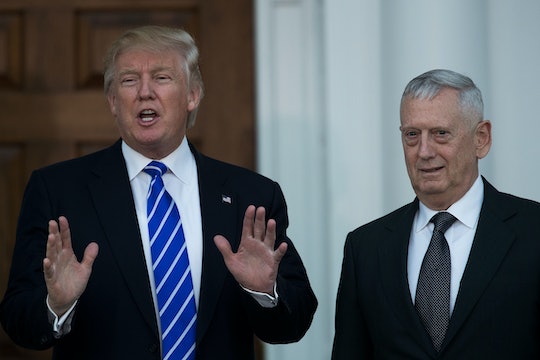 President-elect Donald Trump is a busy guy these days, to say the least. As 2017 gets closer, Trump continues to put together his official White House team and make pivotal appointments to the incoming administration. According to The Washington Post on Thursday, Trump selected retired Marine Gen. James Mattis as defense secretary, but there's a small caveat. As The Hill noted, in order for Mattis to actually be confirmed as secretary of defense, Congress would need to change a law that currently bars anyone who has served on active duty in the past seven years — and since Mattis retired in 2013, that presents something of a problem.

Congress does not change laws lightly, of course; In fact, Congress has only made an exception like the one Mattis would need once before. In 1950, Gen. George C. Marshall was appointed secretary of defense by President Truman after a special congressional waiver to bypass the National Security Act of 1947 was put in place. The National Security Act was ostensibly put in place to ensure the post was not held by a military leader but rather a civilian. In the case of Gen. Marshall, Congress acted quickly (the Korean War was newly under way at the time), but what will happen with Gen. Mattis?

Gen. James "Mad Dog" Mattis is considered one of the most influential military leaders of his generation. When he retired in 2013 as a four-star general, he already had four long decades of service under his belt. Well respected for both his strategic military mind and his straightforward way of speaking, Mattis once said that whoever became the next president would "inherit a mess" and believes the Iranian regime is the “the single most enduring threat to stability and peace in the Middle East.”

The President-elect is smart to think about putting someone as respected as Jim Mattis in this role. He’s a warrior, scholar, and straight shooter — literally and figuratively. He speaks truth to everyone, and would certainly speak truth to this new Commander in Chief.

And Mattis is already proving that he and President-elect Trump share similar lines of thought — or at least the ability to sway one another somewhat; In a recent meeting with The New York Times, Trump recalled that Mattis had offered some much-needed insight about the use of waterboarding (a torture technique Trump wanted to reinstate) when the two men met in New Jersey last month:

General Mattis is a strong, highly dignified man. I met with him at length and I asked him that question. I said, "What do you think of waterboarding?" He said — I was surprised — he said, "I've never found it to be useful." He said, "I've always found, give me a pack of cigarettes and a couple of beers and I do better with that than I do with torture." I'm not saying it changed my mind. Look, we have people that are chopping off heads and drowning people in steel cages and we're not allowed to waterboard. But I'll tell you what, I was impressed by that answer.

Whether or not retired Gen. Mattis, who is a bachelor and voracious reader of military history, is the right person for the job could, of course, turn out to be a moot point if a congressional waiver allowing him to hold the position can't be secured.