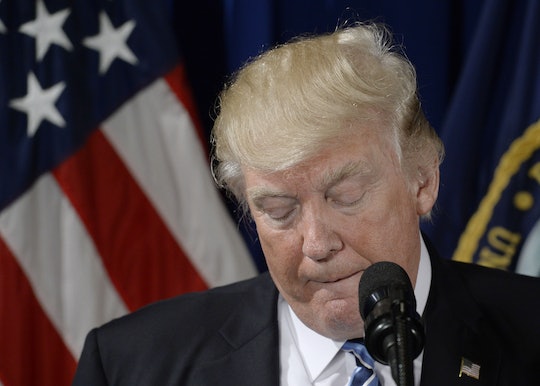 Trump Thought Being President Would Be "Easier"

Schoolhouse Rock! taught me everything about the world when I was growing up. I learned that "and," "or," and "but" hooked up words, phrases, and clauses. I knew that three is indeed a magic number. Most importantly, Schoolhouse Rock! helped me understand that running the federal government is a heck of a lot of work and is not a job befitting of everyone. President Donald Trump missed that lesson, apparently. The world found out that Trump thought being president would be easier, according to an exclusive from Reuters, and Twitter had a field day.

On Friday, Reuters published an interview with the president that revealed just how far Trump is out of his depth in the White House. Three Reuters journalists sat down with Trump recently to reflect on his first 100 days in office, which come to an end on Saturday. Out of that interview came three important revelations: Trump is surprised by the lack of privacy; Trump misses driving himself around; and Trump thinks being president is more difficult than his old life as a ruthless businessman.

The good people of Twitter did not let this go.

Trump's first three months in the White House have been an exercise in flagrant deception. Just read through this BuzzFeed round-up. BuzzFeed reporters Tasneem Nashrulla and Claudia Koerner published a list of 100 lies and falsehoods from Trump's first 100 days in office, and they haven't even come to an end yet. Among the president's frequent misdeeds: Exaggerating about economic growth, twisting the truth about immigration and terrorism, and lying about his connections to Russia.

A recent interview with the Associated Press also exposed Trump's lack of expertise and understanding about the federal government and international relations. He told AP White House Correspondent Julie Pace that the electoral college doesn't favor Republicans (it actually does), that he created more than 500,000 in two months (he did not), and that the first 100 days as president are "not very meaningful" (something he contradicted in the past, and that are actually an important metric). Never mind that he also lied about his support of WikiLeaks and admitted to not fully understanding NATO's role in the global economy. The fact that he revealed to the Reuters reporters that he thought being president would be easier should not actually come as a shock.

All in all, the Reuters interview is a riveting, disconcerting and disturbing look into a flailing presidency. If only — if only — Trump had thought through his decision to run for office before the electoral college handed him the keys to the Oval Office. It would have saved the country a lot of trouble.