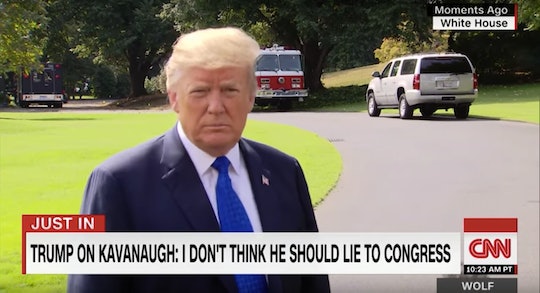 The #MeToo movement has opened new space for survivors of sexual assault to come forward about their experiences. Supreme Court nominee Brett Kavanaugh being accused of sexual assault has pushed the conversation back to a national level. Recently, though, President Donald Trump said it's a "scary time for young men in America" and Twitter was quick to call him out on it.

The Brett Kavanaugh investigation has proven incredibly frustrating for many to watch. Many are familiar with Dr. Christine Ford's accusations against Kavanaugh, as explained by Vox. But as time went on, two other women stepped forward with their own allegations against the Supreme Court nominee, as reported by Business Insider. Kavanaugh has firmly denied all allegations, according to Newsweek.

Since coming forward, Dr. Ford has received threats of physical violence, and even some against her life, according to Business Insider. It is incredibly distressing, especially for survivors of sexual violence, but it also illustrates why this conversation needs to be had. In the midst of this, Trump offered another opinion on the matter that had social media furious.

Considering Kavanaugh is Trump's SCOTUS nominee, few people are surprised by the POTUS' continued support. And on Oct. 2, while preparing to leave for a speaking engagement in Philadelphia, Trump spoke to reporters on White House grounds about the investigation.

“It's a very scary time for young men in America when you can be guilty of something that you may not be guilty of," Trump told reporters, according to NBC News. "You can be somebody that was perfect your entire life, and somebody could accuse you of something."

The initial allegation against Kavanaugh included the involvement of underaged drinking. In a letter sent to Sen. Dianne Feinstein, Dr. Ford outlined that the alleged assault occurred during a house party, noting that Kavanaugh, and his friend, were inebriated at the time, as reported by USA Today.

Kavanaugh's many references to beer during his Senate testimony became such a theme in the last hearing that it was actually spoofed on Saturday Night Live's Weekend Update. Still, as outlined by NPR, many questions remain about Kavanaugh's drinking, which Trump alluded to, saying, "I remember my college days. Everybody was drinking and they used to drink a lot of beer. And there was nothing wrong."

People on Twitter were quick to fire back at Trump.

"Trump said it’s a 'very scary time for young men in America.' You shouldn’t be scared if you didn’t and have never done anything," one user wrote.

Another user tweeted their own correction, saying, "'It's a very scary time for *lying* *abusive* young men in America.'"

"No, it’s a scary time for women when r*pists and abusers, holding powerful positions, continue to force them into silence," one user noted.

Currently, no vote has been held on Kavanaugh's confirmation, although Vox has provided a breakdown on where each senator stands. The FBI is expected to complete its investigation by Wednesday, Oct. 3, with a vote to come later this week, according to The New York Times.

If Kavanaugh is voted into the Supreme Court, that means it is a position he will hold for life. Although it is possible to remove a Supreme Court Justice from their position, it's not easy or likely. According to The Washington Post, "in U.S. history, one justice was impeached, but not convicted, and one justice resigned under the threat of impeachment."

For many, the possibility of Kavanaugh retaining a life position in America's highest court is completely unacceptable. And although Trump's comments are unacceptable, they are indicative of a larger problem. Consider contacting your senator and telling them to vote no on Kavanaugh's confirmation.