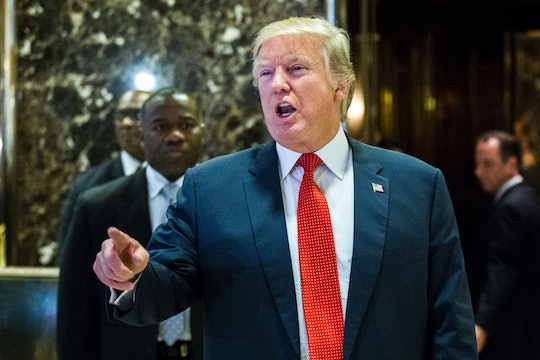 Anyone who uses the internet knows this; President-elect Donald Trump loves Tweeting. Not a week goes by without him trumpeting (get it?) his opinions on everything from the Broadway show Hamilton to Alec Baldwin's spot-on Trump impression on Saturday Night Live. But he doesn't really like Tweeting, guys. It's not his fault he has been reduced to Tweeting. Trump has promised to stop Tweeting once the media reports are "fair." In other words, once the evil mainstream media starts reporting that Trump is awesome, handsome, and right about everything, he can cut out the Tweeting.

Trump hasn't exactly had a love affair with the media since the beginning of his surreal 2016 presidential campaign; it's more of an "It's complicated" situation. His insistence that the media was constantly against him actually helped him out quite a bit with his voters. He has 17 million followers on Twitter, many who truly believe that he is the "maverick," the outsider who challenges the status quo and is therefore a threat to the establishment. Which has meant that, rather than reading about Trump's belief that climate change isn't really a thing, for instance, his followers instead prefer to read about his opinions on Tiger Woods. Or Alec Baldwin. Or Rosie O'Donnell. Essentially whatever Trump's stream-of-consciousness Twitter feed might come up with.

Not that any of this is Trump's fault, of course. Like the cheating husband who blames his wife, Trump insists the media drove him into the sweet, loving arms of his Twitter feed. A place where he can say whatever he likes without pesky fact-checkers ruining his flow. Like that time he Tweeted he won the popular vote (he actually trailed Democratic nominee Hillary Clinton by about 2.5 million in the popular vote), and claimed there was "voter fraud" in New Hampshire, California, and Virginia with no evidence.

Trump's campaign manager Kellyanne Conway has defended Trump's Twitter rants; when asked by CNN's Jake Tapper whether or not Trump's Tweets are "presidential" she argued that they must be, on account of he is the president-elect.

Conway went on to say that Trump's continued use of Twitter when he enters the Oval Office in January will be up to Trump, the Secret Service, and others, according to Politico.

I will tell you that president-elect looks at his social media accounts, a combined 25 million — or probably more at this point — users on Twitter, on Facebook as a very good platform for which to convey his messages. I can tell you firsthand that there are posts that he makes that otherwise would not be heard or seen by those 25 million people but for him posting it. But he's a unique person who's been following his instincts and his judgment from the beginning.

If Trump continues to rely heavily on Twitter to get information out to the American people rather than holding press conferences that rely on facts, it could spell bad news for dissenters; Trump has been blocking critics from following him on Twitter so frequently it's become something of a badge of honor.

Don't tell him I said that, though... I don't want to get blocked by the future President of the United States.