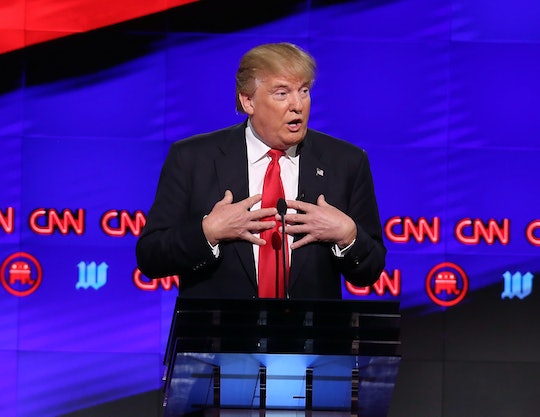 On Tuesday, Donald Trump took the stage in Jupiter, Florida, to give a victory speech after winning both the Michigan and Mississippi primaries, according to the New York Times. Trump — the man who stood behind his comments that "Islam hates us" and who wants to build a wall between the U.S. and Mexico — is also no fan of reporters, and, allegedly, neither is his security team. On Tuesday, Breitbart News reporter Michelle Fields said Trump's campaign manager, Corey Lewandowski, yanked her arm and left bruises when she tried to ask Trump a question about affirmative action, according to the Times. On Friday, Trump said the reporter made up the alleged assault, and it's a disgusting, dangerous example of not believing women or victims of violence. The Guardian confirmed Friday that Fields filed a criminal complaint against Lewandowski.

After the incident, Trump's campaign completely denied her allegations, according to a statement issued to ABC News:

As one of dozens of individuals present as Mr. Trump exited the press conference, I did not witness any encounter. In addition to our staff, which had no knowledge of said situation, not a single camera or reporter of more than 100 in attendance capture the alleged incident.

Trump has previously referred to reporters as "scum" and "horrible," but — don't worry — in Grand Rapids, Michigan, in December, he said he would never go so far as to kill them, according to CNN:

Well, thank God for that. In addition to his comments about reporters, Trump has also said demeaning and sexist things about women. For example, in his book, The Art of the Comeback, he wrote about just how useful women are in helping men be successful, according to The Washington Post:

And, if you Google "Donald Trump comments about women," there's no shortage of absolutely shocking and horrifying real things he's actually said. Here's just few of my least favorites:

From his book, How to Get Rich, according to the Huffington Post:

It's certainly not groundbreaking news that the early victories by the women on The Apprentice were, to a very large extent, dependent on their sex appeal.

And he killed two birds with one stone in this quote about the media and women:

You know, it really doesn’t matter what the media write as long as you’ve got a young, and beautiful, piece of ass.

Why does all of this matter? Because, despite the fact that a Washington Post reporter corroborated Fields' allegations and there's audio of the incident that also supports Fields' portrayal of events, Trump still had the gall to say on Friday that she made up the incident, according to the Hill:

Not only is it disturbing that — with audio that appears to support that Fields was roughly grabbed by Lewandowski — Trump's campaign will not investigate the incident, it's even more disgusting that he actually said she made the incident up entirely.

It's not at all surprising, though, given his comments about both women and reporters. His dismissal of her not only proves that he doesn't take women seriously, but it also perpetuates a dangerous cultural problem where people don't believe women's accounts of their own experiences. How many times, when discussing a widely publicized sexual assault, have women heard, "Are you sure she didn't make it up? Do you think that's actually how it happened?"

To a certain degree, these kinds of questions — about what exactly happened — are things that police officers and lawyers ask in a courtroom when they're trying to determine guilt. But Trump didn't ask an officer to investigate. Rather, there was no investigation at all, and yet he just decided that Fields "made the story up," like a child with an overactive imagination.

His rejection of her story is a direct affront to people who have experienced violence and who have been told that they're exaggerating. It's an example of Trump's power and his dismissal of the experiences of those who have less power than he does. Trump's use of the same language that victim blamers have often used against women shows precisely what he thinks of women, what he thinks of those who question him, and — most importantly — that his word is the last word. His dictatorial approach represses the personal experiences of women and the free speech of anyone who doesn't agree with him, and it shows just how disconnected he is with the country's crucial social issues — a country that, again, he thinks he could actually run successfully.