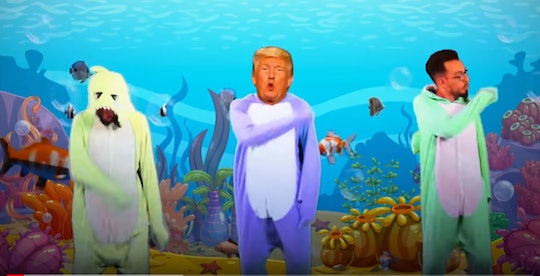 Someone Made A Video Of Trump Singing "Baby Shark" & Well... Just See For Yourself

An hour does not pass on the internet without the mention of two things; President Donald Trump and the song "Baby Shark." President Trump is in the news frequently because some of his policies are proving to be rather divisive, much like his frequent tweeting, while "Baby Shark" is just the boss of the internet for everyone under the age of five plus their parents and caregivers. You probably never thought these two trending topics would meet but you thought wrong so there you go. That's right, there's a video of Trump singing "Baby Shark" and I know for a fact you will never be able to listen to this viral sensation the same way again.

For those of you who are unaware, "Baby Shark" is perhaps the most popular song/video/dance aimed at children on the planet right now. It's an earworm from South Korean company PinkFong that you can't stop singing once you've heard the tale of a baby shark, his mommy shark, daddy shark, et al. Doo doo doo doo doo doo. In this new parody video shared on Youtube on Wednesday, Maestro Ziikos has President Trump singing a different kind of "Baby Shark." To give you an idea of where he's going with it, one of the newly revamped lines is "Let's build a wall doo doo doo doo doo doo."

The video features audio and video clips of President Trump singing the traditional "Baby Shark" lyrics at the outset, dressed in a shark costume with his very own back-up dancers. After Grandpa Shark, the lyrics change to a reference to the proposed wall between the United States and Mexico, one of Trump's 2016 election promises. When Trump gets to the "run away doo doo doo doo doo doo" part of the song, he's being chased by none other than North Korean leader Kim Jong Un riding on the back of, you guessed it, a shark. Because why not?

This video by Maestro Zillio, which has been viewed more than 110,000 times in the two days since it was added to YouTube, is just the latest in a series of parody music videos starring President Trump. Zillio has also cast Trump in his own version of Ariana Grande's "Thank U, Next," Camilla Cabello's "Havana," and the Rick Astley classic hit from the 80's "Never Gonna Give You Up."

While Zillio's other parodies are pretty hilarious, none are quite so bizarre as Trump singing "Baby Shark." There's something about seeing the President of the United States dressed in a shark onesie and dancing that a person can never stop seeing, even if they close their eyes and walk away from their laptop for a moment. Go ahead, try it. It won't work.

The only thing that helps to soothe my retinas after watching Trump sing "Baby Shark" is this thought; perhaps he will watch it too. Late one night when he is going through one of his middle of the night Twitter rants, he might come across it. Watch it straight through a few times. Then softly start singing to himself, "Baby shark doo doo doo doo doo doo... "

That thought makes it all worth it.

More Like This
Barack Obama Is Apparently A “Big Article Sender” In The Family Group Chat
Quinta Brunson Credits Her Parents For Her Confidence, Now & As A Kid
Andy Cohen's 3-Year-Old Son Ben Has Officially Taken Over An Important Hanukkah Tradition
Hilaria Baldwin Posted An "Epic Fail Family Photo" With Her 7 Kids & Husband Alec