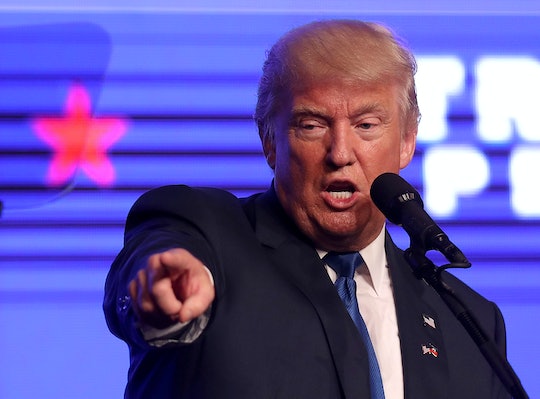 Trump Suggests Clinton's Bodyguards Should Drop Their Weapons, & People Aren't Having It

Trump was referencing Clinton's stance on gun control, which he has boiled down to the overly simplistic view, "She doesn't want guns." While Clinton supports gun control, she also supports the private citizen's right to bear arms. But, I suppose when one is a presidential candidate trying to inflame a rally full of supporters by openly threatening your opponent, why on earth should you let a few boring little facts get in the way? But perhaps we are being too harsh with Donald Trump. Perhaps he spoke rashly in the heat of the moment when he broadly threatened a political figure by insinuating she should no longer have armed protection. Perhaps he had a long soak in the tub and realized he was wrong. Let's check out this tweet he sent later in the day to find out, shall we?

This isn't the first time Trump has alluded to gun violence where Clinton is concerned. At a political event in Wilmington, North Carolina in August, Trump spoke to a crowd of supporters about Clinton's possible choices for Supreme Court judges who might lean towards stricter gun control.

“If she gets to pick her judges, nothing you can do, folks. Although the Second Amendment people — maybe there is, I don’t know.”

It’s called the power of unification – 2nd Amendment people have amazing spirit and are tremendously unified, which gives them great political power. And this year, they will be voting in record numbers, and it won’t be for Hillary Clinton, it will be for Donald Trump.

While Miller explained the whole "power of unification' angle, some pundits pointed out that Trump was discussing the possibility of Second Amendment activists "taking care" of Clinton after she was elected.

Clinton's own camp denounced the statement, with Clinton campaign manager Robby Mook pointing out that Trump has shown “a pattern of inciting people to violence.”, according to The New York Times. Mook also said in a statement:

Whether this is done to provoke protesters at a rally or casually or even as a joke, it is an unacceptable quality in anyone seeking the job of commander in chief. This kind of talk should be out of bounds for a presidential candidate.

The simple fact that Trump feels entitled to make these type of statements seems to say something about the nature of the candidate himself. Whether or not his supporters feel generalized threats or even tasteless jokes about a fellow candidate are below the belt remains to be seen.