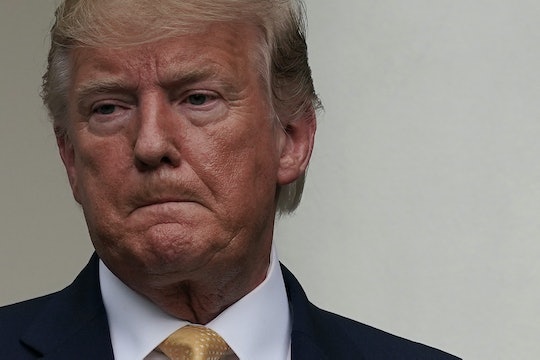 President Donald Trump has demonstrated time and time again that he has trouble respecting women, especially concerning those who work in the political sphere. This sentiment was on full display on Sunday, when Trump told Democratic congresswomen to "go back" to "their" countries, perhaps hoping to further divide Americans and bully these women into silence. As it turns out, however, countless people on Twitter spoke out against the president, decrying his comments as "xenophobic" and "racist."

The Trump administration did not immediately respond to Romper’s request for comment regarding the president's tweets.

Trump appeared to go after a group of first-time Democratic congresswomen who have made names for themselves since the 2018 midterms for being especially outspoken against him, not to mention sharing their so-called radical beliefs, like that all Americans should have access to health care and a good education, according to Bloomberg. These women, who some refer to as "the squad," include Reps. Ilhan Omar, Rashida Tlaib, Ayanna Pressley, and Alexandria Ocasio-Cortez. And on Sunday, the president sent a vicious message presumably meant for these congresswomen via Twitter.

As the President of the United States wrote about these elected officials:

So interesting to see ‘Progressive’ Democrat Congresswomen, who originally came from countries whose governments are a complete and total catastrophe, the worst, most corrupt and inept anywhere in the world (if they even have a functioning government at all), now loudly and viciously telling the people of the United States, the greatest and most powerful Nation on earth, how our government is to be run. Why don't they go back and help fix the totally broken and crime infested places from which they came.

He continued, "Then come back and show us how it is done. These places need your help badly, you can't leave fast enough. I'm sure that Nancy Pelosi would be very happy to quickly work out free travel arrangements!"

Perhaps President Trump was hoping that Democratic Speaker of the House, Nancy Pelosi, might back him up since she and these Congresswomen, all of whom are American citizens and three of whom were actually born in the United States (Omar was born in Somalia and became a U.S. citizen as a teenager, according to Vox), have been dealing with conflict recently.

He thought wrong. Pelosi took to social media Sunday to blast the president, writing: "When @realDonaldTrump tells four American Congresswomen to go back to their countries, he reaffirms his plan to 'Make America Great Again' has always been about making America white again."

Perhaps President Trump thought he could intimidate or frighten the four congresswomen, but his supposed plan backfired. Each woman in question spoke out against Trump's offensive tweet, including New York Rep. Alexandria Ocasio-Cortez, who shared a series of tweets that ended with this mic-drop moment:

But you know what’s the rub of it all, Mr. President? On top of not accepting an America that elected us, you cannot accept that we don’t fear you, either. You can’t accept that we will call your bluff & offer a positive vision for this country. And that’s what makes you seethe.

In fact, what President Trump managed to do with his offensive, racist, ill-informed tweet was unite a Democratic party that hasn't always been on the same page. Presidential hopefuls like Massachusetts Sen. Elizabeth Warren and Vermont Sen. Bernie Sanders, for instance, took to social media to decry Trump's comments.

"Let’s be clear about what this vile comment is: A racist and xenophobic attack on Democratic congresswomen," Warren wrote. "This *is* their country, regardless of whether or not Trump realizes it. They should be treated with respect. As president, I’ll make sure of it."

Sanders said: "When I call the president a racist, this is what I'm talking about We must stand together for justice and dignity towards all."

And one political reporter aptly pointed out: "How many Republican members of Congress have condemned Trump's blatantly racist attack on four of their colleagues this morning?"

MLK: 'In the end, we will remember not the words of our enemies but the SILENCE of our friends.'"

Although it can be disheartening to know that many people have liked Trump's tweet, it's inspiring to see countless people supporting the Democratic congresswomen. As the aforementioned politicians and people on Twitter have mentioned, there's no room for hate in the White House.