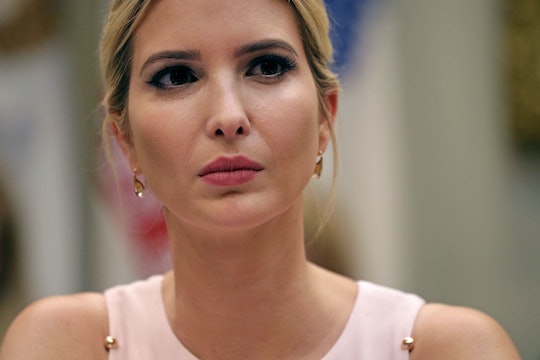 While President Trump might be grateful that Hurricane Harvey has drawn the nation's attention from his ongoing Russian collusion investigation, America's 45th president isn't just twiddling his thumbs in the Oval Office when he's not practicing his golf swing. Since taking office, Trump has quietly dismantled numerous Obama-era reforms — and now another is on the chopping block. Trump will suspend Obama's equal pay protection, despite daughter Ivanka's promise that equal pay protection was part of Trump's platform at last year's Republican National Convention. And, just to rub an extra layer of salt on the wound, Ivanka is totes cool with ditching equal pay protection.

First, a little background: The Equal Employment Opportunity Commission has always required that companies report their racial and gender makeup to the agency. In 2016, Obama expanded equal pay reporting requirements to the EEOC by mandating companies must report how much employees are paid, broken down by race and gender. On Tuesday, Trump administration memo to the EEOC informed the agency it was no longer required to collect employee compensation by race and gender data, citing that such collection would "lack practical utility, are unnecessarily burdensome, and do not adequately address privacy and confidentiality issues."

But at the Republican National Convention, Ivanka said of her father: "He will fight for equal pay for equal work and I will fight for this too, right alongside of him." Girl, we're gonna need the receipts.

It shouldn't be entirely surprising that Trump would roll back one of the key parts of Obama's equal pay legacy, given that Trump's legacy seems mostly about undoing Obama's. I'm not even surprised that Trump would walk back a campaign promise, seeing as how Trump broke 80 campaign promises in his first 100 days, according to Think Progress. But this whole cluster of a presidency has reached a new level of gas lighting when his own daughter issued a statement on Tuesday supporting the EEOC regulatory rollback, as reported by The Washington Times.

Ultimately, while I believe the intention was good and agree that pay transparency is important, the proposed policy would not yield the intended results. We look forward to continuing to work with EEOC, OMB, Congress and all relevant stakeholders on robust policies aimed at eliminating the gender wage gap.

Here's the big problem with eliminating compensation data that includes race and gender breakdowns: It allows American companies to further engage in racial and gender pay disparities without having to worry about those disparities coming to light. Tracy Sturdivant, Executive Director for economic security initiative Make It Work, an organization that advocates for policies that help families, said in an email statement that minority women will be hit the hardest by the Trump administration's actions.

To suspend a crucial Obama-era initiative aimed at increasing pay transparency and reducing the gender and racial pay gap is an unacceptable and deliberate attack on women in the workplace, especially Black and Hispanic women who are currently paid only 63 cents and 54 cents to the dollar white men are paid, respectively.

Pay discrimination by gender is already illegal. But when employees, employers, and enforcement agencies do not know that discrimination is happening, they can’t fix it.

Ivanka has branded herself as a champion of working mothers in her father's administration and even bafflingly landed a role as a special White House adviser to her father, despite zero political experience. The truth is that much like her father, she's all talk: Ivanka hasn't really done much for working moms since her father became president. She's pushed for specific agendas, such as advocating for federal paid parental leave, but critics of her paid leave policy have dubbed it a "cruel joke" to low-income families. And thanks to its hefty price tag, Ivanka's paid leave plan will probably never see the light of day.

Real talk for a minute: I'm sure Ivanka has a lot on her plate right now, like allegedly maybe writing thank you cards to herself and dealing with Jared Kushner's involvement in the Russia collusion investigation — but casually supporting her father's relentless campaign against women, people of color, and human equality in general isn't really helping her image right now.