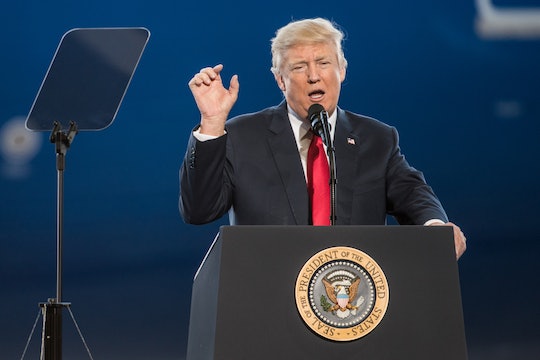 The Anti-Vaccine Movement Has Been Emboldened

So far, Donald Trump's presidency has seen the resignation of national security advisor Michael Flynn, numerous protests, and international flack from all over the world as the result of his and his administration's rhetoric and policy decisions. Now, though, Trump's presidency is also affecting safety here in America. And no, it has nothing to do with immigration or terrorism. No. Now, Trump's highly energized anti-vaccine rhetoric is affecting parents here in the United States. With grassroots movements flaring up in Texas, Trump's anti-vaccine language has empowered the dangerous movement, and its implications are scary.

According to The Washington Post, several anti-vaxxers in Texas have gained momentum in the era of Trump's presidency, with the group, Texans for Vaccine Choice currently engaging more than 1,300 members to take action at federal, state, and local levels to advocate against mandating vaccines in children. And at their recent meeting, members were invigorated with hope that, with "30 champions in that statehouse," their battle was waging on in the right direction.

And, certainly, with Trump in the White House, the anti-vaccine movement must be feeling revitalized. Vocal anti-vaccine spokesperson, Robert F. Kennedy Jr., was reportedly in talks to head a new commission on vaccines. And Trump himself has spewed a fair amount of anti-vaccine sentiment during his campaign trail and on social medial. So it makes sense that concern about whether the health and safety of America's children is a stake is steadily rising.

Kennedy and Trump have both claimed the disputed belief that vaccines cause autism, one of the main justifications behind the anti-vaccine movement. Though the initial study on which such beliefs were based on has now been retracted, and actually found to be a case of fraud on more than one account, many still point to the study as being reason enough not to vaccinate their kids. While Kennedy claims he was asked to head a new commission by Trump, the White House denied the reports, saying no decision has been officially made.

As cases of diseases that were once thought to have been previously eradicated — such as measles, whooping cough, and more — are beginning to make appearances in Texas and other states where the anti-vaccine movement is popular, it's concerning that the current president is a supporter of such anti-vaccine notions, and well-known advocates, such as Andrew Wakefield.

While several celebrities are promoters of the anti-vaccine movement, and the documentary Vaxxed was even considered to be shown at the Tribeca Film Festival, Trump's presidency has seemingly spurred on the anti-vaccine movement even more. While in the past the movement has been widely contested, especially by elected officials, the 2016 election changed that, not just in the White House, but at state levels as well.

Fortunately, no change to current vaccine legislation has been passed. However, as many states allow religious, philosophical, and medical reasons as allowed exemptions from vaccines, it's important to stay informed on this issue. In the midst of travel bans and federal hiring freezes, vaccines may not seem like an important issue, but when something has the potential to affect American children and the health of all citizens, it's cause for concern.