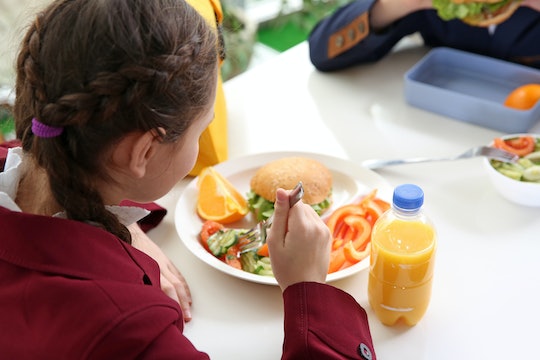 It shouldn't have to be said, but no child should ever go hungry. This sentiment applies to school as well because nutrition can play a key role in a child's academic success. Unfortunately, Trump's food stamps proposal could jeopardize free school lunches for around 500,000 kids, as NBC News reported, and this would be a devastating outcome for many families across the United States. As for how it could happen? It's all in the details.

The Department of Agriculture (USDA) rolled out a new proposal on Tuesday, July 23, to tighten up the eligibility requirements for Supplemental Nutrition Assistance Program (SNAP), according to NBC News. Due to the proposed plan, around 3.1 million people across the country could lose their eligibility for food stamps, as it would end something called broad-based categorical eligibility, according to The New Food Economy. This allows people with higher incomes and some savings to access food stamp programs.

Agriculture Secretary Sonny Perdue told CNN that this proposed plan would save the government about $2.5 billion per year, stating, "For too long, this loophole has been used to effectively bypass important eligibility guidelines. That is why we are changing the rules, preventing abuse of a critical safety net system, so those who need food assistance the most are the only ones who receive it."

Romper has reached out to the White House and the U.S. Department of Agriculture for comment and is waiting for a response.

Trump and the USDA did not immediately respond to Romper’s requests for comment regarding the proposal.

One thing the proposed plan reportedly failed to mention? The hundreds of thousands of children who could potentially lose access to free school lunches. When the policy was first announced last week, the estimated 500,000 children it could affect were supposedly not included in the Federal Register, the "official daily publication for rules, proposed rules, and notices of Federal agencies and organizations, as well as executive orders and other presidential documents."

This detail wasn't missed by Virginia Rep. Bobby Scott and chair of the House Committee on Education and Labor, however. Scott noted in a letter to the Department of Agriculture that this alleged misstep was a violation of procedure, stating, according to ABC News: "The effect on school meal eligibility represents an important technical finding that must be made public so stakeholders have the opportunity to comment on all aspects of the rule’s impact."

In response, the USDA told Scott that around 93 percent of children would qualify for reduced rates to purchase school lunches, but that families would need to apply individually to receive benefits. This would would be another hurdle to jump for families, and some eligible kids could lose meals as a result, according to NBC News.

Lisa Davis, senior vice president of the No Kid Hungry campaign at Share Our Strength, told the outlet that rolling back access to nutritious food for struggling families could see disastrous affects. Davis stated:

Food is the easiest thing to cut out of a household budget. The parents start missing meals to avoid that impact on the kids. And the older kids — the ones in middle school and high school — they often will skip meals to make sure there’s food for the little ones.

Of course, it's no surprise the Trump administration's food stamps proposal has sparked backlash. No child should ever go without food, no matter their family's income.