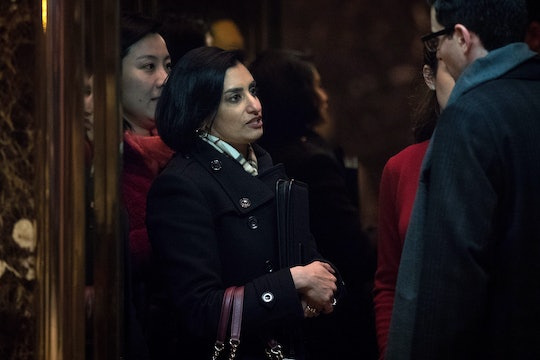 It is a well-known fact that the United States lags behind other countries when it comes to maternity care. After all, giving birth in America is a costly business, even if you have health insurance. That's why former President Barack Obama made maternity and newborn coverage a mandatory benefit under the Affordable Care Act. But those essential health services are now under threat as the result of President Donald Trump's proposed policies. Particularly, Trump’s health nominee thinks maternity care should be optional — a damaging viewpoint that puts the health of parents and children at risk.

More Like This
Vaccinated People Can Ditch Masks. Where Does That Leave Kids?
5 Signs Your Baby Is Too Cold
Moms To Toddlers Everywhere: This Aggression Will Not Stand, Man
Your Guide To Swimming Postpartum

During her confirmation hearing on Thursday, Seema Verma, the president's pick to lead the Centers for Medicare and Medicaid Services, said that people should choose the health insurance benefits they need, not the federal government, according to TIME Magazine. The healthcare consultant from Indiana, who was facing questions about the ACA from Democratic Sen. Debbie Stabenow from Michigan, went on to say that, while some patients may want maternity coverage, "some women might not choose that." Representatives for Verma didn't immediately respond to Romper's request for comment.

Last month, U.S. Senate Republicans approved by a narrow vote a budget resolution that would fast-track the repeal of Obama's landmark healthcare law, the New York Times reported. The ACA, which Verma would oversee if confirmed as head of CMS, made prenatal and postnatal care accessible and affordable by making maternity care a requirement for all insurance plans.

There are four major services that would be at risk if maternity coverage became an optional benefit rather than a mandatory one: breast pump coverage, private lactation rooms, preventive care, and birth control access. The Affordable Care Act's maternity coverage made it possible for chest-feeding parents to receive nursing services and breast pumps without cost-sharing; required employers to provide private lactation rooms so chest-feeding parents wouldn't have to use dirty bathrooms; receive birth control at no-cost, which helps people not only plan their family on their terms, but also treat conditions like polycystic ovary syndrome; and access vital preventive services like breast cancer screenings and crucial well-baby visits.

The maternity coverage provision in the ACA gave millions of parents and soon-to-be parents the opportunity to access previously-expensive prenatal and postnatal care. A 2015 Kaiser Family Foundation report found that the costs of maternity care have kept both uninsured and insured families from using preventive services. That meant more colds, more flus, more illnesses, more trips to the emergency room. And that meant worse financial outcomes. Without maternity coverage, parents and children would be without essential services that have been proven to save lives. So while Verma may think maternity coverage should be optional, I suspect millions of Americans who couldn't afford it before would disagree.