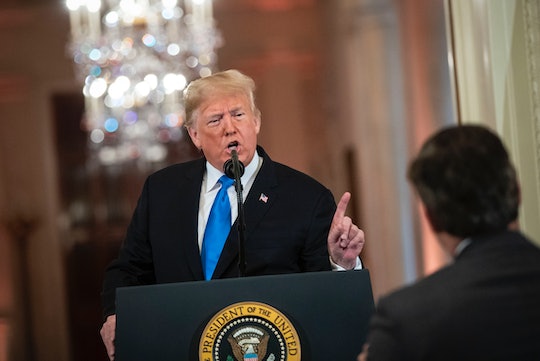 One would think that in 2018, birth control in the United States would be a non-issue. That women's rights have come at least as far as allowing a person to decide when or if she wants to get pregnant. Apparently not, as evidenced by President Donald Trump's new birth control policy, which allows employers to deny contraception coverage, effectively gutting an Affordable Care Act mandate that protected just that.

In the wake of the 2018 midterm elections, the Democratic party have now taken control of the House, while the Republican party retained control of the Senate. And just how did the Trump administration celebrate their continued stronghold on the Senate? By dialing back women's reproductive rights, as The Washington Post reported.

Under the Affordable Care Act, employer-provided health insurance plans are required to cover certain “preventative services” – which were defined through guidance by the Obama Administration as including all contraception methods approved by the Food and Drug Administration, including methods viewed by many as abortifacients, and sterilization procedures.

These rules are expected to take effect within 60 days, as CNN reported. Under Obama's Affordable Care Act, most employers are required to cover birth control in their health care plans at no extra charge to their employees, which some religious organizations didn't love so much. If these new mandates are passed without any legal opposition, that's about to change, according to TIME.

So which businesses can start playing God with birth control coverage on their health insurance plans? Well, it's a bunch of them, as noted in the HHS' press release: "The religious and moral exemptions provided by these rules also apply to institutions of education, issuers, and individuals."

There are a few places of business that aren't allowed to take part in these exemption mandates. According to the HHS' press release, "The Departments are not extending the moral exemption to publicly traded businesses, or either exemption to government entities."

Fatima Goss Graves, CEO of the National Women's Law Center, issued a statement in response to Trump's new birth control policy that will hopefully reassure women on some level:

It's clear that this Administration will stop at nothing to attack women's health care. By taking away access to no-cost birth control coverage, these rules try to give a license to virtually any employer, university, or health insurance provider to discriminate. But if the Administration thinks it can move these rules forward without a fight, they're wrong. Countless women depend on this critical birth control coverage for their health and economic stability — and we will continue to fiercely defend them.

While the HHS projected in 2017 that only around 120,000 women across the country might lose coverage because of these two new mandates, according to The New York Times, the reality could be much more. And more to the point... should even one woman lose birth control coverage because of someone else's personal belief system?