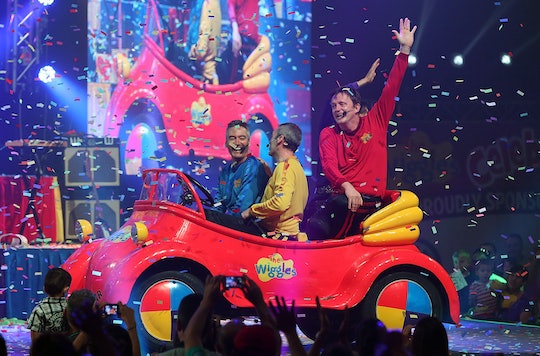 You have to know things have gotten bad when a children's entertainer is throwing you some shade. A recent photo of President Donald Trump's recent rally compared to a sold out Wiggles concert on Twitter even had Anthony Field, aka the Blue Wiggle, gently mocking the event. I guess that's what happens when you oversell and under deliver in the rally department.

Over the weekend, President Trump held a political rally at the Bank of Oklahoma Center in Tulsa, Oklahoma, the first he's held in several months due to the coronavirus pandemic. Prior to the rally, Trump's campaign manager Brad Parscale wrote on Twitter that the rally would see record numbers. "Just passed 800,000 tickets," Parscale tweeted. "Biggest data haul and rally signup of all time by 10x. Saturday is going to be amazing!"

Trump himself indicated on Twitter on Friday that there would be a big turnout. "Big crowds and lines already forming in Tulsa," Trump tweeted. "My campaign hasn’t started yet. It starts on Saturday night in Oklahoma!"

While expectations were apparently high, the reality looked far different. The Tulsa Fire Department told The Hill a total of approximately 6,200 people were on hand for the rally, meaning President Trump's rally sold way fewer tickets than The Wiggles once did. In 2009, The Wiggles sold out the same venue to its full 19,000 capacity for their Go Bananas World Tour.

Photos comparing the two events started popping up on Twitter after the weekend. And on Sunday, Field retweeted a side-by-side comparison of the two events with the caption: "To be fair, we had a better light show!"

The side-by-side comparison tells a stark story, of course. Families filling all the seats all the way to the very back of the stadium to watch The Wiggles sing and dance, while the Trump rally saw row after row of empty seats. As one Twitter user noted, the contrast was even worse considering Trump rallies offer tickets for free and people had to pay to see The Wiggles.

Another Twitter user got real joy out of the fact that Field, a professional Wiggle, gently mocked the president. "The Wiggles trolling Trump is the content I am here for."

One social media user thought they might have figured out why there was such a difference in attendance: "The difference: The wiggles had toddlers in the audience, the trump rally had a toddler on the stage."

As for Field, it seems he is taking the fact that The Wiggles are trending in politics in stride. "First time in Wiggle History we have trended in Politics! Free Fruit Salad for everyone is our message!" he wrote in another tweet.

To be fair, the Trump rally did happen in the middle of a pandemic, which could have kept people who were worried about protecting their health at home. Particularly since, as per NBC News, face masks would not be required at the event, nor would social distancing be enforced.

Even so, it's a rare day when The Wiggles and President Trump are being mentioned in the same sentence. But hey, when the group of children's entertainers are filling stadiums and Trump is left with thousands of empty seats after saying it would be a sellout... what else is there?