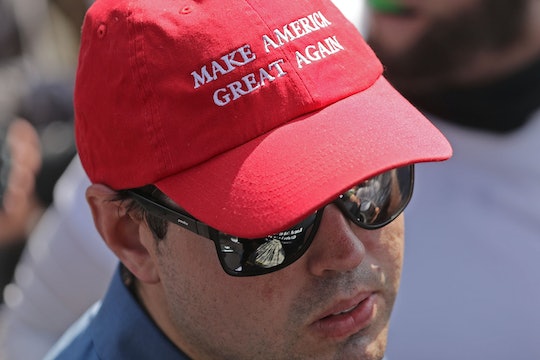 Trump's Reaction To Alt-Right Rally In…

President Trump is a fan of Twitter, especially when it comes to his all-important image. If a celebrity disparages him, watch out. If a news site criticizes him, he's got his itchy Twitter finger aimed and ready to fire. But if an alt-right rally gets violent and has to be dispersed? He is suspiciously cautious. Trump reacted to the alt-right rally in Charlottesville finally, and he seemed careful not to point any fingers.

I want to ask you about the Anti-Defamation League, which this week called on you to publicly condemn unequivocally the racism of former KKK Grand Wizard David Duke who recently said that voting against you at this point would be treason to your heritage. Will you unequivocally condemn David Duke and say you don't want his vote or that of other white supremacists in this election?

Trump's response at the time? "Give me a list of the groups and I'll let you know."

He never disavowed the KKK, never said a word against the white supremacists. And apparently... the hits just keep on coming.

While Trump might like to feign gross ignorance when it comes to Duke and the white supremacists, Duke has no trouble sharing his admiration for the president. At Saturday's rally that almost was, Duke praised Trump and said the hate-filled protest "fulfills the promise of Donald Trump."

The "Unite the Right" rally in Charlottesville, Virginia was ostensibly organized as a protest. Demonstrators from several alt-right groups were purportedly incensed about the removal of a statue depicting Confederate General Robert E. Lee, as well as the renaming of two parks once named for Confederate generals (one of which was the site of the rally, Emancipation Park). The event was organized by outspoken alt right blogger Jason Kessler and set to begin at noon on Saturday. After Virginia Gov. Terry McAuliffe declared the city of Charlottesville a state of emergency in the hours leading up to the rally, violence did, indeed, break out. In-fighting between several factions of the alt-right community, as well as counter-protesters broke out, and police had to step in to declare the rally an unlawful assembly. In the hours after Emancipation Park was emptied out, a car crashed into a group of peaceful counter-protesters, injuring several people. And what did President Trump have to say in the wake of such a national travesty?

Charlottesville sad. That's it. Staying out of the fight and hedging his bets. Even First Lady Melania Trump reacted to the events in Charlottesville with more grace and concern (and speed) than her husband.

President Trump's has spent the better part of two years building a voter base on suspicion, fear, and hatred. Build a wall to keep Mexicans out, issue a totally illegal travel ban against Muslim-majority countries, change the immigration laws so we can profile people coming into the country.

He might want to keep his hands clean and stay out of the fight now, but let's face it; the fight lands on his door regardless.