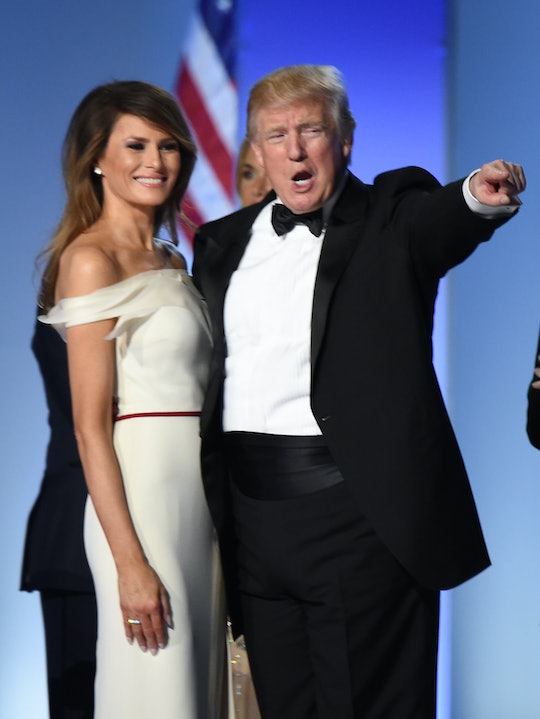 Women all over the world were marching on Saturday. They were uniting to support diversity, to encourage inclusion, to connect. And perhaps most of all, to protest a president with a proven track record of misogynistic tendencies. While 500,000 marchers descended on Washington, we waited for President Trump's response to the Women's March.

When he finally did? No one was surprised.

"Peaceful protests are a hallmark of our democracy," Trump — or rather, Trump's team — tweeted on Sunday morning (at an hour that wasn't 3 a.m. —shocking). "Even if I don't always agree, I recognize the rights of people to express their views." It was a canned, diplomatic response to what was an outpouring of impassioned views, which, when compared with his other blistering tweets, likely meant it hadn't been written by him. In short, what should have been Trump's first major response to the people as president sounded nothing like him.

Except when it did: Two hours prior to "Trump's" tweet about the "rights" of citizens to dissent, he (and make no mistake, it was definitely him this time) took to his timeline to rant, "Watched protests yesterday but was under the impression that we just had an election! Why didn't these people vote? Celebs hurt cause badly."

President Trump was sworn in to office on Friday. His first official order of business was to sign an executive order to "seek the prompt repeal" of the Affordable Care Act, which offers extensive health care benefits to 20 million Americans. Meanwhile, outside his window, a (peaceful) storm of half a million activists was brewing. And he appeared to do his best to utterly ignore it. He hid behind his new golden curtains, they marched. They marched in Washington, New York, San Francisco, Phoenix. They marched in Paris, in London, and even in Antarctica (which is a telling reminder of just how unpopular President Trump truly is). Celebrities spoke out against him, like Scarlett Johannson who stood in front of a crowd of thousands and called on Trump to "support all women, and our fight for equality in all things."

Yet Trump, who normally leaps at the chance to take to social media to lambaste detractors (especially celebrities), remained silent for a full 24 hours after crowds first began to gather. Perhaps his feelings were hurt because his inauguration drew a significantly smaller crowd than the Women's March on Washington. Perhaps he was just busy. No one can be sure but his team.

And after all that waiting to see if he would understand why so many people were protesting, if he would respond in the same "spirit of democracy and honoring the champions of human rights, dignity, and justice who have come before us," I discovered something. His response to the marchers had nothing to do with anything. In fact, it almost seemed to dismiss the women's please as complaints about something trivial. In fact, they are absolutely not.

President Donald J. Trump does not get to be the one who defines the Women's Marches. He might have been the spark that lit the fire, but he sure as hell doesn't get to be the flame, and while his "we may not agree" stance is cordial, it's him telling women that he thinks very little of their legitimate concerns and that women's rights in general are something he doesn't need to change his stance on — another terrifying thought.

Meanwhile, there were other politicians who supported the Women's March, strong men and women who fully believe in "the first step towards unifying our communities, grounded in new relationships, to create change from the grassroots level up," as the Women's March has stated.

His response doesn't change what happened one Saturday in January. Because now, women truly understand the sort of power they wield.