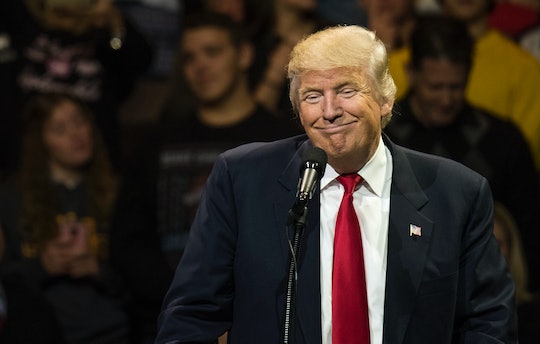 So what do you get for the man who has everything? Because Christmas is coming, and if you happen to be shopping for a little something for President-elect Trump you might be feeling stuck. Well, I've got an idea: scotch tape. Because Trump's scotch tape tie photo is cracking the internet up right now, and he is probably going to want a little reminder of these happy times.

Trump was outed by a pesky gust of wind in Cincinatti on Thursday during the first lap of his "thank you" tour where he talks about himself and brags a whole bunch. Not that I really think of Trump as a style icon, but even I was surprised by his inventive (frugal?) way of holding his tie together with a little scotch tape. Trump taped the front of his tie to the back. I know, McGyver would be super proud of him. The soon-to-be Commander-in-Chief, the real estate magnate, the man whose name is utterly synonymous wealth, used scotch tape to hold his tie together? Well, I never. Trump actually sells a line of ties, so I sort of figured he should be something of an expert in the tie department. Not so much. And what does the internet think of his scotch taped tie?

Well, they're basically loving it.

Washington Post writer Phillip Bump is getting an especially big kick out of Trump's scotch tape faux pas. Bump pointed out that Trump has a history of wearing his ties far longer than would be considered fashionable, often past his belt, quoting Business Insider's Linette Lopez who noted:

At its shortest, a man's tie should rest on the top of his belt. At its longest, it should end at the bottom of the belt. Ideally, though, a tie should hang somewhere in between the two.

Bump called Alteration Specialists in New York to get a price on how much it would cost to fix Trump's tie. Because I suppose it's that kind of news day.

While Bump focused on finding a solution to Trump's little tie problem, others on social media were fans of the possible symbolism.

There is, naturally, a plus side to Trump's apparent thriftiness; maybe being thrifty is going to be his "thing". After all, he has said that he plans to forego the presidential salary of 400,000 dollars while in office. Or maybe he just doesn't get fashion. What's next, President-elect Trump? White socks with your trousers? Shorts?

It's going to be a wild ride.