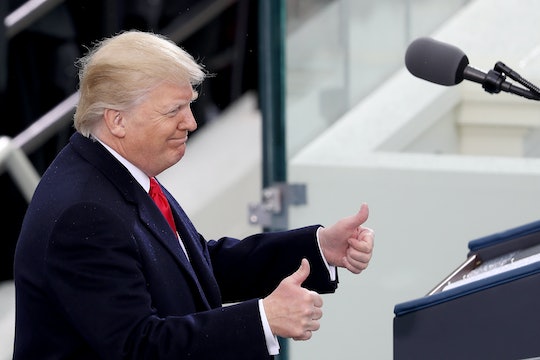 President Trump is known for being out of line with his comments and actions, especially on Twitter. But Trump's Twitter cover photo is reportedly from Obama's Inauguration, which means he's crossed a line the world didn't know existed.

It may sound petty to bring up Twitter at a moment like this, but if Trump really is using a photo from Obama's Inauguration, this is the ultimate petty move. Throughout the entire election, Trump has been incredibly disrespectful to Obama. According to CNN, it took until Sept. 2016 for Trump to admit that he was wrong and that Obama was actually born in the United States. After he was elected, he continued to be disrespectful, but in another sense — he continued to talk about how popular he was, how he was surpassing Obama's popularity, and how he was going to make America great again.

By stealing moments from Obama's Inauguration? I guess so.

According to TIME, at Trump's inaugural concert held Jan. 19, Trump claimed that he didn't know if there had ever been a concert held at the Lincoln Memorial before, but that if it had happened before, it was very seldom. Apparently he didn't know that Obama held his inaugural events at the Lincoln Memorial in 2009 and President Bush held his there in 2001.

Then to use a photo from Obama's Inauguration? It just proves that Trump thinks he is more popular and better than Obama. According to Slate, as soon as Trump was officially sworn in as president and took over the Twitter account for the President of the United States, the cover photo also changed, looking remarkably like a photo from Obama's Inauguration.

Were there not enough people at Trump's Inauguration to find such a picture as powerful as Obama's? Did he simply choose the first set of American flags he could find in Getty? Does he have any idea what he's doing? That last question can be answered with a resounding no, but he should know that stealing and plagiarism isn't becoming of the President of the United States.

According to Mic, the differences between Obama's Inauguration and Trump's Inauguration are staggering, much like the country expects their presidencies to be. While it's upsetting that Trump is trying to pass off a photo on Twitter as one of his own rather than one created by supporters of Obama, let's just hope that this isn't the last thing Trump copies from Obama.