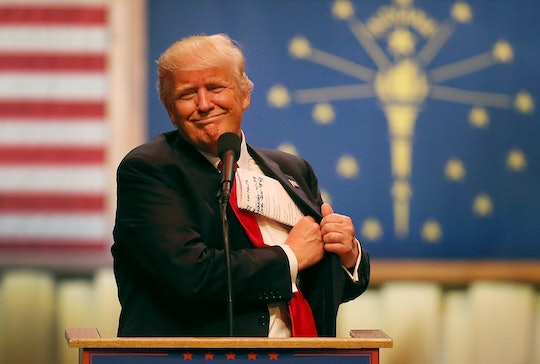 After winning the Indiana primary with more than 50 percent of the vote Tuesday night, Donald Trump delivered a rather mild victory speech. But that doesn't mean he didn't let out a ridiculous zinger or two. Specifically, Trump's "winning with women" quote pissed off a lot of women. Yes, Trump actually said "I love winning with women," as if he's actually winning with any women.

"It is a beautiful thing to watch, and a beautiful thing to behold," Trump said his victory speech in Indiana, according to CNN. "We are going to make America great again." But — wait — America won't be great until all of its women are in their correct places, which, according to Trump, isn't in positions of power (or anywhere else they want to be if it's outside of the home, really).

Remember, prior to this last week, Trump was known for his outrageous and sexist language against women. For example, Trump actually said this about what it means to be a man, according to The Washington Post:

Clinton turned the comment around on Trump so effectively that now he seems to be trying to build up his cred with the womens (that's what they're called, right?). During his victory speech in Indiana, he said surrounded himself with women (see above) and said, "I won with women. I love winning with women." And women everywhere collectively thought, "Oh, uh, did we miss a memo? When did you win with us?"

Trump can continue to say random things and act as if they are reality, but most of the women in the country aren't going to buy it. You can't call women "dogs" and "fat pigs" or call a breastfeeding woman "disgusting" and then suddenly think you can win women back. You can't say you support punishing women who receive abortions and then expect women to forgive you. You cannot use derogatory language about other races and expect women — or anyone — to accept your rhetoric. Trump is as far away from winning with women as he is from a more credible spray tan, and women are making that crystal clear.