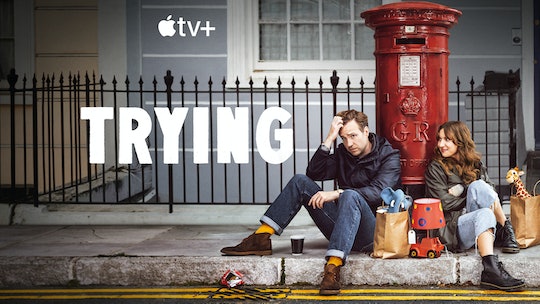 The complicated world of adoption is often fraught with stress and complex emotions, but a brand new British show called Trying that's coming to Apple TV+ later this week aims to tackle it all with comedy, so you can officially update your weekend watchlist.

On Friday, May 1, all eight 30-minute episodes of Trying, which follows the lives of married couple Nikki and Jason, played by Esther Smith and Rafe Spall, will premiere on Apple TV+. In Trying, Nikki and Jason have been trying to have a baby for some time, but it seems it's simply not in the cards for them. So they try to figure out how to move on with their lives, which Nikki explains in the trailer will probably mean, "a small piece of us dies and we just carry on with whatever's left."

Instead of going that dark route, Nikki and Jason decide to look into adoption. And, of course, things get complicated pretty quickly. Their families weigh in with their thoughts, as do their friends. And perhaps most distressing of all, Nikki and Jason realize they're going to have to convince an adoption panel that they are worthy of raising a baby.

"All Nikki and Jason want is a baby — but it’s the one thing they just can’t have. How are they going to fill the next 50 years if they can’t start a family? They already went through The Sopranos in a weekend," the show's synopsis reads. "After ruling out every other option, Nikki and Jason decide to adopt and are confronted by a world of bewildering new challenges. With their dysfunctional friends, screwball family, and chaotic lives, will the adoption panel agree that they’re ready to be parents?"

Over eight episodes, all of which were written by Andy Wolton and directed by Jim O’Hanlon, the couple will see if they can pull it off and become the parents they are desperate to be.

The adoption process can be difficult for most families in a number of ways, and it looks like Trying is hoping to cover them all. For instance, in one scene from the trailer, Nikki and Jason sit down together to discuss elements of their personality each one thinks the other should work on like the fact that Jason "doesn't like some children" and Nikki is "forgetful." Then, of course, they need to answer some intensely personal questions about their lives for the adoption panel.

Even if you haven't gone through the adoption process yourself, it looks like Trying will be one of those shows that will resonate with everyone. After all, who doesn't need a bit of a laugh (and I suspect from the melancholy soundtrack from the trailer, a bit of a cry) every now and then? Check out Trying on Friday, May 1, on Apple TV+.