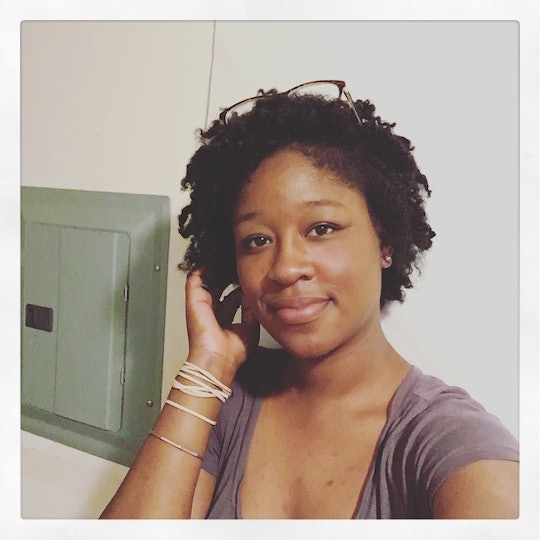 Turns Out, Keeping My Son Home While I Work Isn't Good For Either Of Us

Early Monday morning, I shuffle about in my kitchen trying to put together my son’s food for daycare for the day. I packed his breakfast, two snacks, some juice, and a lunch I was certain was going to go mostly uneaten. After zipping up his book bag and triple checking that I didn’t forget his sheets for nap time like I usually do, I called out for my son to come to the front of my apartment so we could head out for daycare. Heading back into my apartment after dropping him off for the day, my neighbor, who had noticed I’d been home during the day a lot more, asked me if I was taking some vacation time from work. I kindly explained that I’d quit my former 9-5 to work from home. She followed up with “well, why did you drop your son off at daycare then?”

For years, I daydreamed about the time in my life where I'd work for myself from home as a writer. After having a child, however, that dream seemed like it shifted. I felt like, instead of being a work-from-home mom, I now also had to be a stay-at-home mom, which was never my personal desire as a parent. I'd finally built up the nerve to quit my day job to pursue a writing career from home full time and I felt like, because I was home, my kid should be too. During the last two weeks at my 9-to-5, all of my co-workers congratulated me, telling me how envious they were that I'd be able to keep my son home with me. While cutting back on daycare crossed my mind, I had no intention of becoming a full on stay-at-home mom just because I would now be working from home. But by the time my last day rolled around, everyone — from my son's dad to my colleagues to my best friends — suggested I consider keeping my son home. So I decided to do a test run.

Because I'm a mom who works from home, I felt like I also had to be a stay-at-home mom to my son. I felt guilted into having him home with me because I was already there.

I decided to keep him home for three out of the five days a week. Even though my son is an only child and keeping him home away from the other children at daycare seemed more harmful than beneficial, I felt like it was my job as a work-from-home mom to also be a stay-at-home mom now as well. The two titles, I thought, were essentially the same thing. Because I'm a mom who works from home, I felt like I also had to be a stay-at-home mom to my son. I felt guilted into having him home with me because I was already there.

It only takes a limited imagination to imagine just how difficult it can be to get work done with a very talkative and gymnastics-obsessed 3 year old at home, but it was even harder for me to hush the guilt I felt every time I dropped my son off at daycare in the morning. He was only going to daycare twice a week, yet there was this unspoken battle waging inside of me each time I left him there. On one hand, I felt like being a work-from-home mom automatically meant that I had to be a stay-at-home mom and by not adhering to that model, I was somehow a bad mom. On the flip side, it seemed totally absurd for me to isolate my son for most of the week and plop him in front of the television while I tried to finish my day-to-day work.

So I did what I thought was best for him and me: I sent him back to daycare full-time.

Trying to work from home while also providing the adequate amount of attention, entertainment, and patience necessary to simultaneously be a stay-at-home mom is a lot to ask of anyone.

It’s been almost five months since I quit my job to work from home full time and in that time, I've learned that our Monday-through-Friday daycare schedule is what works best for both of us. While working from home has allowed me with flexibility to spend more time with my son, it didn't make sense for me to interrupt my son's schedule to pacify my own guilt. Instead of committing to a limited daycare schedule, I found the right balance for us. Now, I take him to daycare later in the morning so we can take our time getting dressed instead of rushing around. I'm home when he comes in, and dinner is ready, which means I don't feel like I'm wasting quality time with him to prepare a meal. I have a clearer mind and the energy to play with him and spend valuable time that I didn't have before.

Trying to work from home while also providing the adequate amount of attention, entertainment, and patience necessary to simultaneously be a stay-at-home mom is a lot to ask of anyone. I got rid of the cloud of guilt that followed me around by finding the right compromise for us and our needs, instead of a carbon copy of what I thought other women in my position would do. I realized that sending my child to daycare so that I can work, whether it be from home or outside of the home, was not selfish, irresponsible, or careless. It's a requirement for me and there is nothing to be ashamed about.