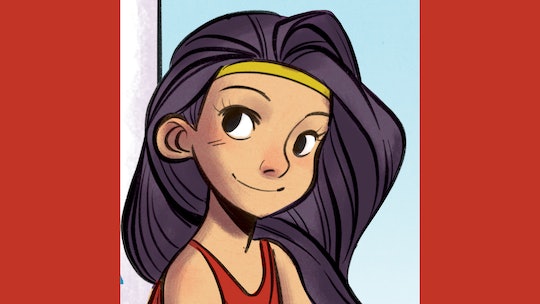 If You Loved Young Wonder Woman, You'll Love This Peek At A 'Diana' Graphic Novel

Adolescence is the origin story we all share (Kal-El crashed to Earth in a spaceship, started a new school, and eventually figured out his super powers, and isn't that as good a metaphor for puberty as any?), so you'll be excited to hear that we are getting a graphic novel about Diana Prince, aka Wonder Woman, as an 11-year-old Amazonian.

Diana, Princess Of The Amazons, by Shannon and Dean Hale, is the first Wonder Woman title from a new imprint of DC Comics, DC Zoom, devoted to bringing tween superhero stories to readers aged 8 to 12. Yas! Younger readers can now meet their favorite heroes before they donned the cape or the spandex. The best part about the venture is that DC Zoom is finding some of the most beloved middle-grade authors to bring these beloved characters to life.

Diana is all about Wonder Woman, who at age 11, wasn't too sure of her place in the world, and Romper has exclusive details on the plot, as well as a sneak peek at the illustrations by Victoria Ying.

It's hard to believe, but Diana wasn't always so super. In Diana, Princess Of The Amazons, we get to live the growing pains that come with greatness. Romper got the first look at the official synopsis, so you can hear about what Diana is up against:

Cut off from the rest of the world, Diana had an idyllic childhood on Themyscira. But now 11-years-old, she's beginning to feel more and more isolated. Though she has many "aunties" and a loving mother, she is an only child. THE only child, in fact.

After an escapade goes wrong, Queen Hippolyta chastises Diana for not living up to the Amazon standard. Diana just can't seem to measure up, no matter what she does! Literally every other person on the island is an adult proficient in their trade and mighty in body, while she is gangly, sometimes clumsy, and not particularly proficient in anything. She's not Wonder Woman yet. What Diana needs is a friend; someone her own age whom she can talk to. But when she decides to take matters into her own hands — she may just make a monster instead.

Writers Shannon and Dean Hale are also the authors behind The Princess in Black series (illustrated by LeUyen Pham) and Rapunzel Revenge (illustrated by Nathan Hale). Shannon is also the author of Real Friends and Best Friends, both of which showcase her understanding of being a tween and the pressures of finding your people. Together, Shannon and Dean have four kids who are all pretty eager for more Wonder Woman lore.

It's fair to say that Shannon is a lifelong fan of Wonder Woman. "I grew up watching reruns of Lynda Carter as Wonder Woman on TV and running around the house in my Wonder Woman underoos," she tells Romper. "I’m currently an adult woman with a huge gold Wonder Woman emblem my husband Dean put on the hood of my minivan."

Dean has his own memories of Wonder Woman and other superheroes. "It started when I read a reprint digest that had Wonder-Tot stories in it," he recalls. "Here was a kid my age (probably younger, but I felt like she was my age), and she was competent and powerful and yet still a kid. I was reminded of this in the recent Wonder Woman film when we see young Diana on Themyscira. That girl was SO cool. This is who little me wanted as a friend."

In fact, he views his wife Shannon as an earthly version of Diana Prince, describing her as his best friend and "the closest thing to Diana in real life."

"Diana is strong, loving, understanding, supportive, true, and wise. What better qualities could you ask for in a friend? Like all of us, she grew into those traits, and exploring that journey is, for me, the best kind of fun,” he says.

Shannon and Dean are determined to bring the good the bad and the ugly that comes along with being the only child in a world of strong women.

"We really wanted to explore what it would be like to be the only child in a community," says Shannon. "Surrounded by immortal warriors, artists, scholars, and her mother the beloved queen, Diana is the only person on Themyscira who doesn’t really have a place. What would it be like to have no one your own age? Her desperation for a friend leads her to do risky things with monumental consequences."

Along with Shannon and Dean, artist Victoria Ying is going to be breathing life into the story, and shared an exclusive look at the cover!

"It’s been a dream come true to get to draw Diana as a child," Ying tells Romper. "She reminds me of myself in a lot of ways and watching her struggle with the same kinds of things I struggled with made me feel very close to the character in a way I never had before."

You can ogle more of the art she's creating for Diana, Princess of the Amazons below:

Shannon Hale previously talked about the appeal of graphic novels for reluctant readers of standard fare. "We cannot keep enough graphic novels in the house for their insatiable appetite," she says. "Graphic novels are the reason a couple of our kids are readers at all."

Parents of voracious graphic novel readers should be on the lookout for DC Zoom titles. The line launches in April 2019 with the release of Super Sons: The PolarShield Project by Ridley Pearson with art by Ile Gonzalez. Additional titles debuting this year include DC Super Hero Girls: Spaced Out by Shea Fontana and illustrated by Agnes Garbowska, Dear Justice League by Michael Northrop with art by Gustavo Duart , Black Canary: Ignite by Meg Cabot and Cara McGee and more titles to be announced. and more titles to be announced.

Hopefully they tide you over as you wait to read Diana, Princess Of The Amazons, which will be out in the world January 7, 2020.

"I would have loved to have this kind of Wonder Woman book as a child," says Ying. "She’s my favorite superhero!"

She's ours, too Victoria!

More Like This
Karamo Brown Teamed Up With His Son On A New Children’s Book To Share A Powerful Message
From Captions To Gifts, These Are All The Kindergarten Graduation Ideas You Need
My Nanny Showed Me How To Be A Mother
Infertility As A Stepmom Means Double The Alienation, But So Much Love