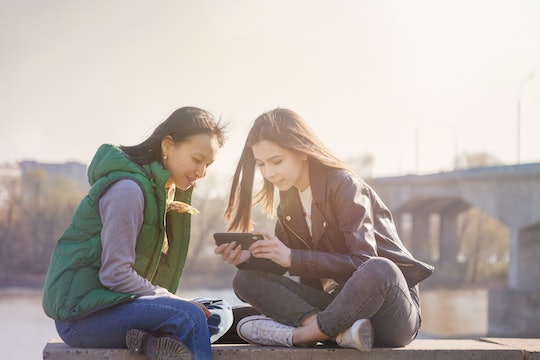 Some parents are probably well aware tweens and teens are watching more online videos than ever, as with the rise of TikTok and other social media apps, there's seemingly an endless stream of content to consume. And this trend was most recently confirmed in Common Sense Media's 2019 census on Media Use By Tweens and Teens, an annual report that aims to paint a "comprehensive picture of the use of media by young people in the U.S." Not only does the report prove online content consumption has exploded among these age groups, but it also reveals compelling statistics about social media usage for Generation Z.

To establish the findings, the report — released Tuesday — surveyed "more than 1,600 U.S. 8- to 18-year-olds, about their use of and relationship with media," according to The Washington Post. Questions centered around their "enjoyment of various types of media activities, how frequently they engage in those activities, and how much time they spend doing so."

Tweens are categorized in the 8 to 12 age bracket, while teens fall in the 13 to 18 age range. Types of media activities looked at were "reading books in print, listening to the radio, using social media, watching online videos, and playing mobile games."

A lot of eye-opening stats were uncovered in the report, but one especially compelling piece of information revolves around online video consumption. Interest among tweens and teens has skyrocketed, with "more than twice as many" young people viewing videos every day than they did in 2015. What's more? The average time spent watching these videos has "roughly doubled."

The most popular place for tweens and teens to view video content is on YouTube, with 76 % of 8 to 12 year olds using the site despite its 13 and older age restriction. And 53% of the same age group say YouTube is the site they visit most frequently for videos.

As for the amount of time spent viewing content? The rate from 2015 to 2019 has jumped about "a half hour a day to about an hour a day on average," according to CNN.

There are a lot of key takeaways from these findings, including the topic of how much screen time parents should allow children. The report suggests that monitoring screen time is still important because, as the stats outline, content creation is a low priority for these age groups and many don't engage with apps in meaningful ways. This appears to back up a recent study that argues the problem isn't how often kids use screens, but rather what they're consuming.

Bottom line? A tool's power lies in how you use it, so consider having conversations with your tween or teen about how they can engage with online video content in more significant ways. And if you ever have any concerns about your child's online habits, don't hesitate to reach out to a trusted expert.