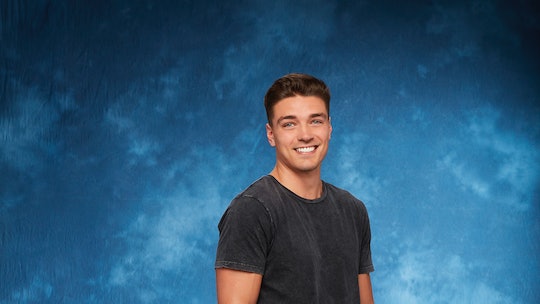 Dean's Mustache Is This Season's 'Bachelor In Paradise' Villain

Dean Ungler, from Rachel Lindsay's season of The Bachelorette, had a pretty rough season in Paradise two years ago. But he's back on the beach for another shot at love, redemption, and I guess a rebrand via bold facial hair choices? Tweets about Dean's mustache on Bachelor in Paradise would suggest that perhaps it wasn't the way to go.

Chris Harrison didn't even try to stifle his response when Dean first sauntered up to the resort — he immediately doubled over over laughing. Dean politely explained what he'd been up to since Season 4, telling Chris that he moved out of Los Angeles, currently lived in his van, and didn't have a job. In fact, Dean described himself as a "vagabond traveling the world," which somehow hasn't become his lower third yet. Several jokes about what a catch Dean seemed like at this point in his life were made, but ultimately, he said he was in paradise to "atone for [his] sins."

"Last time you saw me in Paradise, it just wasn't my finest moment," he explained in a confessional interview. Viewers may recall Dean finding himself in a love triangle with Kristina Schulman, who's back this season, and Danielle Lombard AKA D-Lo. This, in itself, isn't that egregious. What was bad was the moment when Dean admitted in broad daylight on camera that Kristina was "so much more like, perceptive and smart" while D-Lo was "just so f*cking hot." And then he picked D-Lo, which somehow is the lesser crime here.

"I think I'm apprehensive to this whole situation but I think deep down, part of me knows that true love could be found here," Dean went on to say. "That's what I'm coming here for is to hopefully find that for myself."

For her part, Kristina nearly gave herself whiplash watching him come down the stairs, but the two mostly stayed away from each other after a cursory date card interview. By the time he got to Caelynn, however, Dean's charm factor cranked up to eleven.

The mustachioed vagabond explained that he was living out of his van because he planned to visit all the national parks in America that summer, which successfully caught the attention of several women on the beach — including both Caelynn and Tayshia. Even though he barged in on Caelynn crying over Kristina, Dean overlooked her nerves during their initial chat and asked her out anyway. She happily accepted.

Once on their date, Dean struck the perfect balance of being self-deprecating without coming off as a pathetic villain seeking the last word. He exhibited a remarkable level of self-awareness, explaining to Caelynn that he had a tendency to lack foresight, which partly inspired his summer of road-tripping. Amazingly, Caelynn found his lifestyle super intriguing and the pair hit it off. Literally no one on the beach had a single bad thing to say about his facial hair, which is more than I can say for Twitter. You can keep following the meticulous maintenance of Dean's mustache when Bachelor in Paradise airs Monday and Tuesday nights at 8 p.m. on ABC.