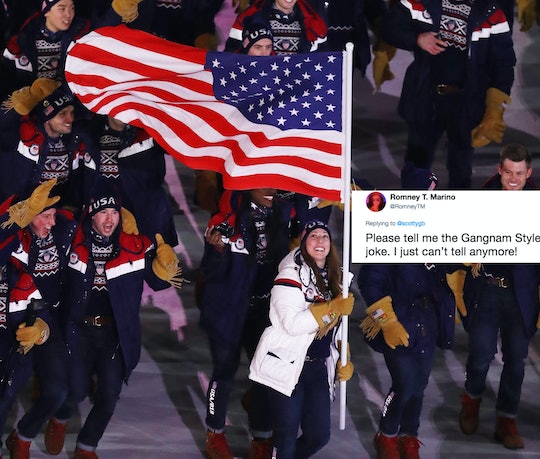 "Gangnam Style" Played At The Opening Ceremony, & People Had A Lot Of * Feelings *

For the uninformed, the Winter Olympics opening ceremony is literally about kicking things off for the games, but because there's also a parade of all of the Olympic teams from every participating country, there's quite a bit of fanfare too, including music to keep them all moving. The tweets about "Gangnam Style" at the opening ceremony, however, show how divided viewers were about the former hit song playing as the United States team walked in.

At the opening ceremony, there was a healthy mix of different Korean and American pop songs as well as some pretty memorable remixes. Basically, it was like one big dance party as each team walked in the arena. But since "Gangnam Style" was such a universally loved hit when it came out years ago, hearing it during the opening ceremony elicited some strong reactions from Twitter.

Some viewers loved it because it's still a fun song that makes you want to try and fail to recreate the dance that goes along with it, while others were not having it, especially since the United States walked out to the song. At the very least, the opening ceremony dancers seemed like they were having a good time, but as far as "Gangnam Style" at the opening ceremony goes, Twitter isn't in agreement.

The song was originally a South Korean hit from pop star Psy, but it soon became popular in the United States, sort of as a cultural "moment." I'm not sure what song would have been best for Team USA to walk out to during the opening ceremony, but some viewers on Twitter felt that it shouldn't have been "Gangnam Style."

Other viewers, on the other hand, were living for the familiar pop song suddenly pumping through the speakers at the opening ceremony. To be fair, it's catchy and fun to move to, so in a way, you really can't blame them.

Most of the music at the 2018 Olympics opening ceremony helped set the tone for the event. It was all fun and upbeat and definitely helped to get viewers and even the athletes in the spirit of things. Yes, this includes "Gangnam Style," which is a song you either love or hate, but it will probably go down as one of the most memorable moments of the ceremony.

There was plenty of other Korean pop music, or K-Pop, during the opening ceremony, and there's even more to come during the games themselves, as artists BoA, iKON, Seventeen, and EXID will perform live concerts throughout the Olympics. So in a way, giving Psy's hit song a shout out during the opening ceremony was to be expected. But years after the song was even released, who would have thought it would bring out such strong emotions and leave Twitter divided?

For every viewer who would have preferred not to hear the song while watching the U.S. Olympic team make its entrance, there was one who absolutely loved having the familiar song added to the mix.

There are plenty of us who were over the song soon after it became the overnight viral hit that it was, but you also can't help but ask how can you hate on "Gangnam Style" when the opening ceremony dancers themselves seemed to be doing a dance that was similar to that which was in the music video? Granted, they were there to dance through the entire parade of countries, but that was some serious dedication.

The important thing was that, for the most part, everyone seemed to have fun at the opening ceremony. If viewers thought there was one song that was too tired and played out to be included in the musical lineup, it definitely didn't negatively impact the actual event.